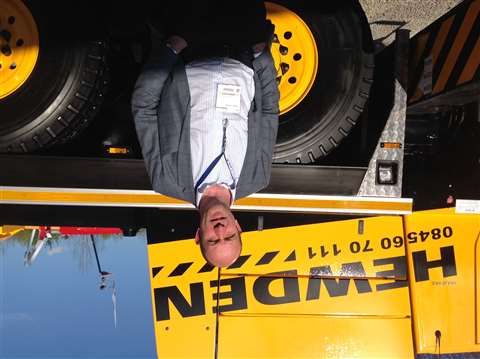 Speaking during Bauma 2016, Hewden's new chief executive Adrian Murphy confirmed that the company has invested in 21 cranes predominantly over 100 tonnes from manufacturer Tadano. He said the deal, worth around £11 million (€14 million), included two new 220 tonne models.

“We have increased the capacity of our crane fleet to 220 tonnes,” Mr Murphy said. “This includes the 220 model with a hydraulic jib for narrower spaces. We’re stopping at 220 tonnes for the moment, but I wouldn’t limit us to that size crane in the long-term.

“We have around a 6% market share in the UK and are targeting around 15%. As well as construction, we are targeting the infrastructure market; the industrial sector as well as the events sector, where we have also invested around £1 million (€1.3 million) in fencing and trackway recently.”

Mr Murphy said the company had also refreshed its fleet with new hybrid gensets from Firefly, as well as generators from SDMO, telehanders from Genie, and skid steer and tracked loaders from JCB.

The company also made its first acquisition for 10 years in the form of lifting and materials handling company Interlift - a deal which was finalised at the start of the year.

“We are looking at other bolt-on acquisitions,” Mr Murphy said. “We are looking to add expertise and expand into niche areas. It is part of a big effort to reshape our business.”