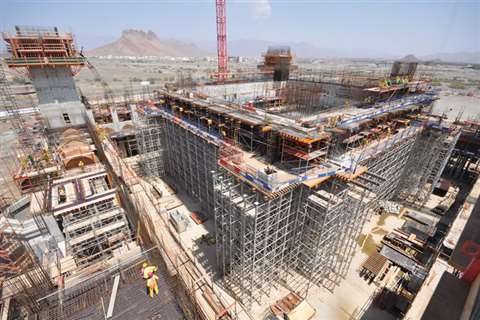 RMD Kwikform placed a 900 mm wide run of Rapidshor shoring within the Alshor Plus birdcage support to speed up construction at the Sultan Qaboos Mosque in Oman.

This year saw the 100th ‘super tall’ building of more than 300 m built when the Jiangxi Nanchang Greenland Central Plaza, towers 1 and 2, topped out in June, in China. The 303 m Jiangxi project is now the tallest building complex in Nanchang, stepping above the International Finance Centre (239 m) and the still-under-construction Jiangxi Nanchang Greenland Zifeng Tower (268 m).

More than half of the world’s tallest buildings have been built in the last four years, with the total super tall category almost tripling in the last seven years.

The world’s current tallest building – the Burj Khalifa in Dubai, UAE – towers 828 m above the desert. However, it will lose its crown when the 1 km high Kingdom Tower in Jeddah, Saudi Arabia is completed. Meanwhile, there are plans in China for the 1 km Phoenix Towers, in Wuhan. If this project goes ahead, it will undoubtedly be designed to eclipse the Kingdom Tower.

For those working in the construction sector, being involved in a high-rise project can often mark the pinnacle of a career. From architects with a sky-high vision, to contractors and equipment manufacturers offering cranes, access equipment, formwork or concrete pumps, high-rise often comes with high prestige and high payout, alongside high build costs and high risk.

As architects get more ambitious, manufacturers need to create equipment that is up for the job, no matter how high.

Freddy Almeida of Almeida Concrete Pumping and Equipment is a dealer, distributor and supplier of the C90S.

“At moment we have four including ours, which are working on buildings from 20 to 40 floors. Each one of these pumps is used 2-3 times per week and is performing very well. One of our customers just finished a 40+ storey building in Brooklyn, while two in Manhattan of 30+ floors and are currently being worked on,” Mr. Almeida explained.

“This is one of the more affordable and faster ways to get a job done with the least amount of manpower. We are seeing more buildings raised up with companies using this type of equipment, including the tallest buildings being built in New York,” he added.

From pumps to formwork, both have been the long-considered construction method of choice for high-rise developments.

Carillion Alawi is working with RMD Kwikform on the construction of the US$ 64 million landmark Sultan Qaboos Mosque in Nizwa, Oman. The site has required shoring towers of up to 43 m high, to support the casting of the mosque’s dome, as well as concrete slabs and beams.

Faced with a change in programme sequencing, which required both beams and slabs to be cast at the same time, engineers from RMD Kwikform designed an innovative solution to erect a run of Rapidshor shoring support inside the previously erected Alshor Plus birdcage, specified for the initial works. By combining both Carillion Alawi was able to speed up the construction cycle for the project.

“The dome was the ultimate challenge,” admitted RMD Kwikform regional sales manager, Bellphine Campbell. “Rapidshor shoring, reaching a height of 17 m to the top of the dome, was arranged at varying heights and adjusted using the systems jacks to support the curved structure of the dome. The Rapidshor shoring was founded on top of an Alshor Plus birdcage, a staggering 25 m high, erected from the main

5.5 m slab. In total, this created a record-breaking tower for RMD Kwikform, some 42 m tall.”

Due to be completed in 2015, the new Sultan Qaboos Mosque will be one of the largest in Oman.

Formwork manufacturer Doka is currently working on one of the tallest buildings in Italy – the 202 m high Torre Isozaki in Milan.

Located within the new sustainable CityLife-Project, the tower will have 53 storeys, including basement levels, and cover an overall area of 53,000 m2. Doka Italia supplied automatic climbing formwork and protection screens for this project.

“Torre Isozaki is the first high-rise building in Italy where core floors and walls are realised in the same step rather than the core being built beforehand,” said Massimiliano Guelfi, engineering manager of Doka Italia.

Another automatic hydraulic climbing system, Meva’s MAC, is being used on the construction of Ardmore Park in Singapore, a condominium tower being built for developer SC Global by Dragages Singapore, a subsidiary of Bouygues.

The MAC system does not use anchors on the external face of the core walls but pockets on the internal face, leaving a smooth finish. This is vital for the project, as the architects stipulated an architectural concrete finish for the core walls because they are exposed on some floors.

The MAC system is also being used on the new Roche Tower in Basel, Switzerland. When completed, the tower will be 178 m high. The 41-storey tower has already passed the 130 m mark and is progressing at a storey a week.

Climbing at a floor a week, the building has thrown up some challenges for Peri, not least because of its variable elliptically shaped storey slabs. Peri is using its flexible rail climbing system (RCS). Horizontally cantilevered RCS climbing rails have been used which make accommodating the varying length of cantilevers possible.

For the formwork for the core walls, Peri engineers combined the ACS self-climbing formwork with a platform and gallows.

Site access is another area of challenge for high-rise contractors, with passenger and material hoists playing an important role in development.

One of the longest-running high-rise builds of modern times, the Sagrada Familia cathedral in Barcelona, Spain, is using several passenger and material hoists from Saltec Torgar.

The company has supplied four single cabin and one twin cabin, 1,500 kg capacity, T1 passenger and material hoists to the construction site.
Building of the Sagrada Família started in 1882, with architect Antoni Gaudi getting involved in the project in 1883. The cathedral currently has a completion date of 2026 – to mark the 100-anniversary of Gaudi’s death. It will have a final spire height of 170 m.

In Turkey, contractor Sera Yapi Construction is using four Alimak hoists for materials and personnel lifting at Emaar Square, one of Turkey’s largest private developments. The new development will include seven high-rise towers.

The four Alimak hoists are all Scando 450 units, designed for materials and personnel, and can lift a maximum load of 2 tonnes to a height of 150 m. The hoists are working in conjunction with 14 tower cranes to supply all the lifting needs.

“We have fixed all four Alimak hoists to the side of the excavation, where the entrance is located. The prime use for the hoists is personnel transportation, as the cranes are handling most of the material lifting,” explained Mrs Aydin, project coordinator for Sepi Yapi.

“When the foundation work is complete we shall redeploy the hoists to the exterior of four of the medium-rise structures, where they will be used for both personnel and materials,” she added.

Emaar Square will be completed over several phases between 2015 and 2017.

The development consists of 44 blocks being built on a 300-acre site on the Anatolia side of Istanbul. To maximise the views from the high-rise towers, many of the taller structures have been designed in an oval, and feature floor-to-ceiling windows.

In Munich’s old town, a Wolff 166B crane with hydraulic luffing gear is helping build a new office building in a tight corner of the city.
Construction work is ongoing in adjacent sites, which is why the contractor Riedel Bau opted for the compact flat-top crane. The crane’s luffing jib can be raised to an almost vertical position, meaning it takes up minimal space when not in use.

“Because of its design, the Wolff can slew in the minimum of space without projecting beyond the site, meaning that we can work without any danger of collision,” said Norbert Zährl, site manager for Riedel Bau.

In Russia, a Potain tower crane is at the centre of one of Moscow’s tallest new buildings. The MD 265 B crane is working on Evolution

Evolution Tower features a unique spiral design where each floor is twisted 3º in relation to the floor below, meaning the whole building moves over a course of 135º.

Meanwhile, in China six Potain tower cranes have been used to build two 280 m tall bridge pylons. The cranes spent two-and-a-half years building the pylons at the Chishi Grand Bridge, which will span 1,470 m and carry its road deck 180 m above the ground. The bridge will open at the end of this year.

High rise construction has come a long way in the past decade and, with the first mile high building possibly only 20 years away, industry developments look set to continue in leaps and bounds. What will be the final topping out height? And what product innovations will manufacturers magic up to keep their products top of the game?