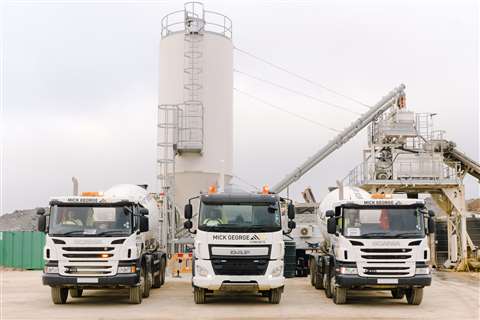 Highways England – the government-owned roadbuilding and repair agency – has agreed to trial an ultra-low-carbon cement on a major UK road project.

The organisation will use Cemfree, produced by Cambridgeshire-based building materials company DB Group and supplied by Mick George Concrete, which has dedicated a 100-tonne silo to the new material.

Cemfree is said to achieve embodied carbon savings of up to 80%, when used to replace ordinary Portland cement in concrete production.

Highways England will use Cemfree on a series of ancillary applications, such as kerbing, drainage and signage, within a controlled live section of the €1.76 billion A14 Huntingdon to Cambridge road improvement project.

The initial supply of 500m3 of Cemfree is anticipated to save approximately 500 tonnes of carbon.

At its current global production rate, Portland cement contributes some 4 billion tonnes to the planet’s carbon dioxide levels, making it the third-highest manmade source of CO2.

Michael George, Managing Director at the Mick George Group, said, ‘’Due to an increased corporate emphasis on carbon reduction targets, there is undoubtedly more environmental consideration in construction build designs.

‘’We have a strong reputation for developing cutting-edge solutions and niche products; the introduction of Cemfree represented an opportunity to do both simultaneously.’’