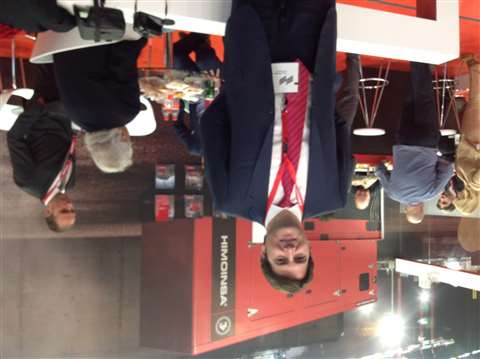 Franciso Gracia, executive director of manufacturer Himoinsa, said the company was seeing good momentum in rental markets around the world, and highlighted a recovery in Southern Europe in particular.

“We are seeing increased demand for larger generators around the world, particularly in emerging markets as demand for temporary power increases.

"Big power projects in the Middle East and Africa are driving demand, for instance, while we are also expanding our presence in America, China and India in line with market growth.”

Mr Gracia said the European recovery was also continuing, at a slow but steady rate. “We see demand for generators in Southern Europe recovering, making the overall European economy more balanced. Southern European countries are coming back after strong recessions.”

The manufacturer has launched a new lighting tower – claimed to be the first on the market fuelled by liquefied petroleum gas –at Bauma Munich.

The company said the AS4012 LPG lighting tower boasted 384000 lumens, could light up to 32000m2, and guaranteed 24-hour running times. It features four metal halide floodlights and a mast with 360º manual rotation.

It is fuelled by four LPG cylinders, and powered by a Yanmar 3GP88-GB1PB engine, whose additional power for auxiliary supply rises to 5kW (50Hz) and 7kW (60Hz).

It can also be connected to an external tank to extend its autonomous operation. The integrated tanks are LPG-certified for vehicles, making it a versatile option for the rental sector, with the ability to refuel at a service station with an LPG pump.

It can be used with natural gas just by activating a selector. There are therefore three different power supply options: integrated tanks or external LPG or NG supply. This model is available in a dual-frequency version, for operation at 50 and 60Hz.

A distinguishing feature of the new models is a common rail injection system and new electronic regulation, according to the company. This is said to result in greater displacement power and lower fuel consumption than other engines of the same capacity.

The new models run at 50Hz, offering a power range of 745kVA to 1270kVA in PRP and 822kVA to 1402kVA in standby. The new series includes a dual-frequency model, the HRMW 1270 D5-6, primarily aimed at the rental sector – this model will be on the company’s stand at the show.

The company said the dual-frequency HRMW 1270 D5-6 was designed to meet the demands of the rental sector, including quick fuel connections on the outside of the container, water-decanting diesel filters and pre-heating resistance with a pump.

In addition, Himoinsa said its modularity and easy installation mean it is ideal as a temporary backup power plant when electrical power is inadequate or when energy demand peaks occur, to provide electrical power during maintenance work on the mains power system, or to provide energy in inaccessible locations or construction sites where no mains power system is available.

The HRMW 1270 D5-6 also incorporates a panel that can synchronise up to 32 generators in parallel and control load sharing.