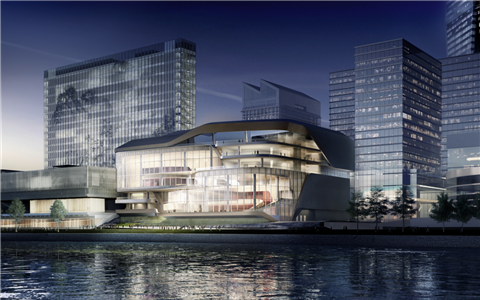 Artist’s impression of the completed Lyric Threathre in Hong Kong, for which Gammon Construction will be delivering the extended basement and public infrastructure works

Two contracts in Hong Kong with a combined value of HK$7.7 billion (US$984.9 million) have been awarded to Gammon Construction – a 50:50 joint venture between UK-based Balfour Beatty and Hong Kong-based Jardine Matheson.

The first is a HK$6.2 billion (US$793 million) contract to construct the Kai Tak West Section of the Central Kawloon Route in Hong Kong on behalf of the Highways Department of the Government of the Hong Kong Special Administrative Region.

It will be a key part of the 4.7km-long dual three-lane Central Kowloon Route that links the Yau Ma Tei Interchange in West Kowloon with the road network on Kai Tak Development and Kowloon Bay in East Kowloon.

The works will comprise the construction of a 370m-long underwater tunnel and the associated temporary reclamation in Kowloon Bay of about three hectares. They will also involve a 160m-long cut-and-cover tunnel in Ma Tau Kok, a 125m-long road and a 170m-long underpass in Kai Tak Development.

Gammon Construction is due to start on the project early this year and finish in 2025.

At the peak of construction, it is expected to require a workforce of about 400 people.

The second contract is to be carried out for HK$1.5 billion (US$191.9 million) on behalf of the West Kowloon Cultural District Authority (WKCDA) in Hong Kong. Gammon Construction will be delivering the extended basement and public infrastructure works called the L1 Contract for the Lyric Theatre Complex and Extended Basement at WKCD.

It will involve excavation followed by the construction of a two-level reinforced concrete structure, public infrastructure works, including drainage, and a traffic lay-by with associated temporary works.

The joint venture is already delivering the foundation works for the project, and has twice received the WKDCA highest commendation for safety performance.

Work is due to commence in early 2018 and is expected to be substantially completed by mid-2020.

It was said that 450 workers will be employed at the project’s peak.