Hydraulic breakers - on the up? Lindsay Gale reports on this market segment. 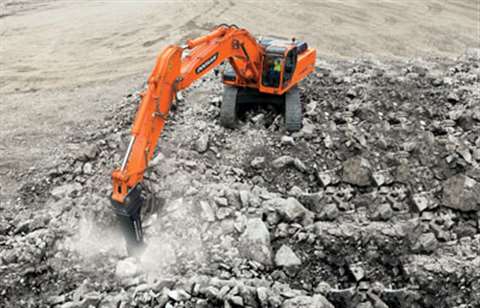 Lower cost of ownership. This is one of the main drivers that breaker manufacturers now have to respond to. Lindsay Gale reports on this market segment.

As with many constituent product segments in the construction industry, hard and fast data on unit sales of breakers has always been hard to track down. Looking back to past issues of D&Ri, in 2009 the estimated number of units sales had fallen by 60-70% from its 2007-2008 high as the downturn kicked in.

At that time, breaker manufacturers were unanimous in saying that market conditions were extremely difficult. We asked the question of those same manufacturers: has demand begun to recover and what do you predict for the future? The response this time around was somewhat more mixed.

Atlas Copco's marketing manager hydraulic attachments, Torsten Ahr, responded: "Since the end of 2009 we have seen slightly improved market conditions. Orders have increased and bauma 2010 gave a degree of valuable impetus to our worldwide customers. We expect business to stay at this level and perhaps even show a slight increase during 2010."

Alain Carbonnel, Montabert's marketing director, was more up-beat. "Demand is currently strong following a recovery over the last year. This is particularly true in Asia and for large breakers all across the world, a demand that is the result of ongoing infrastructure projects.

"Rental companies are also requiring a greater number of breakers than in previous years. We predict that the demand will continue to grow, especially in China."

Others were much less optimistic. Promove's Antonio Cannaò was typical when he said. "The downturn is continuing in 2010 and we are looking at single dealers (in Europe) constantly decreasing their sales.

"In this situation, Promove's strategy is to put more and more effort into selecting and increasing the number of our dealers in order to compensate for this decline. Furthermore, this climate is constantly pushing prices down [something we will come back to] and competition is becoming harder and harder as volumes decrease."

He continued: "From my point of view, the European market for earthmoving equipment and demolition attachments will not grow significantly in the next two to three years.

"What I see is a depressed property market (both residential and industrial) and governments facing stark financial realities, with consequent difficulties in financing infrastructure investment. In my opinion, this outlook is not going to change any time soon."

The same conditions appear to apply on the other side of the Atlantic. Maverick Hammers' marketing manager Sarah Badr was equally pessimistic: "Global demand for hydraulic breakers has now stabilised, although perhaps only temporarily. We are still seeing contractions in all but pockets of the North American market.

"Demand remains strong in regions of South America, the Middle East and China. Maverick Hammers is predicting modest increases in demand, beginning in Q4 of 2011, with very modest market growth rates through 2015. Make no mistake, there remain headwinds in the market and we expect this to continue for some time."

She went on: "The existing lower production levels in primary materials, aggregates, along with domestic road building and residential construction point to a growth neutral climate through the end of the year."

And there are those that see no real change of any kind. Italian manufacturer Idromeccanica was brief and succinct when a spokesperson responded: "At the moment, the market is the same as it was in 2009 and we hope it will remain the same for the rest of 2010." Reading between the lines, this suggests to your editor that no growth will be seen, but a further decline is feared!

When it comes to the main market drivers, there have unquestionably been changes. Maverick's Sarah sums it up well. "What has been interesting over the last 24 months is that the market drivers have changed. Cost is definitely a primary factor - however, we have seen an increased focus on customer support, parts availability and rebuilding services.

"Customers are stretching their dollars much further and Maverick Hammers has responded by becoming a source of not only products, but of advice and consultation. It's not about selling the customer a product in this moment in time, but rather, it's about supporting our current products and customers in the market and helping them get through what has been a significant market correction."

Atlas Copco's Torsten takes a similar view. He told D&RI: "The main driver is cost of ownership. It is not only the initial investment that needs to be taken into consideration, but also the operating cost.

"The operator's salary, the maintenance costs, excavator fuel consumption and many other factors make up to two thirds of the total lifetime cost. Additionally, we see a big impact through environmental issues such as noise and vibration damping and energy efficiency."

He went on: "We are responding to the target of total cost reduction with an optimised performance-to-weight ratio. That means a defined work can be done with a smaller breaker, a smaller excavator and less fuel consumption.

"Or the other way round, you can achieve more efficiency with the same breaker and can complete the work faster."

Price is the mind of Promove also. Antonio said: "In these tough market conditions, price looks to be the main driver for purchasing decisions. Even the leading manufacturers are more and more careful about this and are introducing 'cheap' or 'second' lines of breakers which benefit from the reputation of their main brands."

He went on: "Promove's philosophy has always been to offer the highest quality at a reasonable price, and this is not going to change. Our technical department is constantly researching the optimisation of our production process in order to be ready for price reduction needs, but this will never happen because of compromises in the choice of materials or a decline in overall quality."

"Our reputation is based on performance, reliability and rapid support and in any case, customers recognise these values when considering purchasing options. Although tough competition and the market downturn give more power to customers, which consequently puts more pressure on price, lowering product quality to meet customers' price expectations would risk the good name of a product."

Antonio confirmed that Promove are currently working on new attachments, including two new breakers, which will receive their official launch at the forthcoming Samoter trade show in March 2011.

He would not be drawn to provide details of the new units, but did say that one is intended to fill a perceived gap in the company's range of heavy breakers while the other will replace an existing light model to offer higher performance and improved reliability.

The former will feature all the standard features of the company's XP heavy line, including blank firing protection, square cylinders, silenced heavy-duty casings, auto-greasing and a frequency/impact energy adjustment valve.

Montabert has a slightly different take on current market drivers. Alain said: "For customers using breakers on big projects or in quarry applications, the most important driver is breaker productivity, as this impacts directly on the profitability of their business.

He continued: "For Asian countries or for customers that don't have an intensive breaker usage, cost and robustness are the major drivers. We have developed an entry-level range, Blue Line, which is well adapted for these customers."

Others are responding to the need for prolonged service life.

Indeco, for one, has introduced a new anti blank firing system (ABF) designed to increase the service life of all components subject to wear and tear in a breaker.

Now installed as standard on all its breakers from the 104 kg HP-200 to the 7.8 tonne HP16000, ABF eliminates blank firing through the eradication of down pressure whenever the breaker tool is not resting firmly on the surface to be broken.

"Through the use of ABF we've been able to reduce stress on both the breaker body and the excavator arm," said a spokesperson.

Breaking Technology Inc. (BTI) has introduced large cross section shock absorbing isolators mounted in the upper and lower sections of its BXR series of breakers to reduce vibration feedback to the carrier unit.

Director of international sales Robert McArthur said, "In expanding the BXR series to include five new models in the 6780 Nm to 16275 Nm power range we considered it imperative to reduce vibration feedback to the excavator."

"Precise tolerances between the piston and cylinder provide high efficiency and power as well as a fast blow rate, while a restraint system guides the front head within the housing, thus reducing the loads on the tie rods and upper portions of the breaker unit," he continued.

The basic technology underlying today's breakers is well established, with developments consisting of continual refinement rather than massive strides forward and the future will likely see this trend continue.

The manufacturers' take on this is well summarised by the view expressed by Atlas Copco's Torsten Ahr when he said: "In the future there will be improvements in terms of materials and manufacturing that support our focus on performance-to-weight ratio as well as environmental targets. But I do not see any general change in the technology coming in the future."