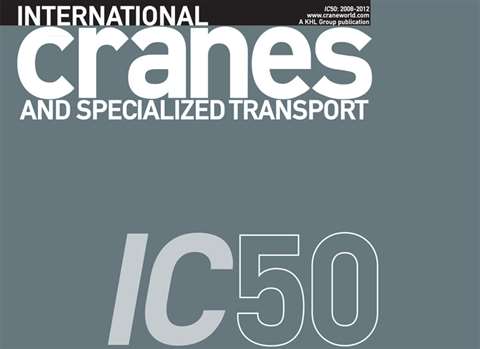 Clear evidence of a return to growth in the crane industry is shown in the 2013 IC50 ranking of the world’s largest crane-owning companies. Compared with last year’s 5 % increase, in 2013 that has tripled to a 15 % rise in the IC Index for the top 100 companies.

Broadly matching the top 100 this year, there are 3 % more company depots than in 2012 and 10 % more employees. A difference is that there are slightly fewer cranes but still a rise in the Index, of 3.5 %. It shows a lower percentage growth at the top of the IC50 but that the trend for larger cranes continues. With the bulk of the new super heavy lifters impacting the IC50 in 2011, this year’s growth can be attributed to end users adding units from the top of the capacity range Liebherr, Manitowoc and Terex crawler crane ranges.

The 2013 total for the full IC50 is 213 fully completed entries (with space for the top 123 of them in the magazine). In 2012 there were 207 but this year we have removed 12 companies for reasons that include acquisition and insolvency so, despite having 18 new entries, the net increase is six companies.