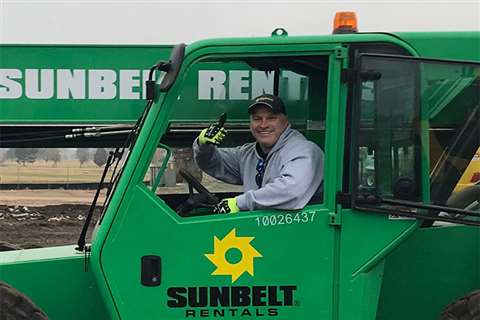 Chris Godek gets hands on at the Demolition Rockies event in Colorado, March 2019, just days before becoming NDA president

In terms of his two-year tenure at the helm, Chris is now one-quarter of the way through it. When he hands over the reins at the end of the NDA’s annual convention in the spring of 2021, the next person at the top will be the individual tasked with leading the association into the 50th year of its existence.

Chris himself may not have that level of miles on the clock, but he is an experienced demolition professional of more than 20 years standing and, like many of his contemporaries, he has worked his way up after to some extent falling into the industry by accident.

“I started as a union labourer,” said Chris, taking up the story.

“After some time, I started supervising large projects in the New York State and Metro area. I found myself travelling extensively for work.

“I ended up working in Connecticut on a large project, and while talking to an employer there, found I could work full time and not have to travel.

“My goal was to finish college at night. With this goal in mind, I took a job for a contractor in Connecticut, but like all great ideas, it did not work as planned. Within a year, I found myself taking a management position for another contractor, and a year after that, I started my own company.”

Fast forward to 2019 and New England Yankee is an established part of the demolition landscape, specialising in testing and abatement, waste removal and post-construction clean up as well as demolition. Not surprisingly, it is one of the almost 500 members and affiliate members across the industry that the NDA represents.

“We are currently finishing up a host of work at Yale University, as well as a couple of school to housing conversion projects.

“Our sweet spot for work is when we are given the contract to perform any hazardous materials work and finishing with the structure demolition.”

Chris took up the NDA presidency – as usual serving a two-year term as vice-president and fulfilling a range of board positions for the association in the previous years – in exciting times for demolition.

The pro-construction Trump administration had reached mid-term and the benefits of it for Chris’s industry were becoming apparent. In mid-2018, the Association of Builders and Contractors’ Construction Backlog Indicator, one of the yardsticks used by the NDA to measure the prosperity of its member companies, tabled a record high of 9.9 months. 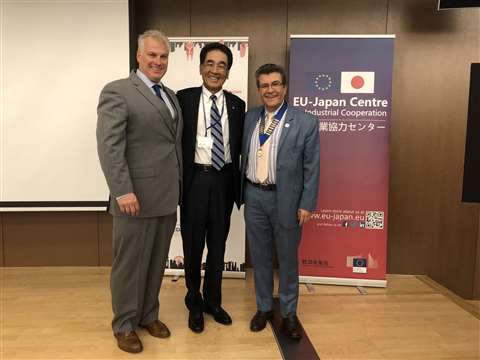 Even though that figure has fallen away in the year since, it is still healthy compared to 2016. It’s not just the statistics that prove the point, anecdotal evidence gathered by Chris offers much the same outcome.

But the role of the NDA does not diminish when times are good.

“The NDA is very important to the industry,” said Chris.

“We have seen the advent of more and more regulation, and a vast amount of knowledge and technological advancement is on the horizon, so trade organisations will be a greater resource to contractors, vendors, and suppliers, as well as end users and building owners.

“We are finding the newest generation of owners and managers are bombarded with information and are looking to find their information from a trusted source. We strive to provide that.”

Asked for his own priorities for his two years as the US demolition industry’s figurehead, Chris is forthright.

“Where do I start, and how much time do we have?

“It is my belief that through education and collaboration, we can make our industry safe. That by educating end users, we can help them select the best contractor for the project. So, if I were to sum it up, I would say education.”

Possibly as a result of this, Chris believes the relationship between “is healthy and getting stronger every day. Suppliers are listening to the needs of contractors and fitting up and modifying equipment based on these needs. Contractors are opening up and discussing their thoughts on equipment.

A recognised advocate for the demolition industry

In his early days as president, Chris has already committed to spreading the NDA’s word outside of its home country. In May, he spent a week in Japan as part of the European Demolition Association’s (EDA) study tour of that country and was a speaker at the conference hosted by the EDA and its Japanese equivalent on the final day of the tour.

There, he outlined the NDA’s priorities in terms of research data and technology, education, advocacy, marketing and communications, or in Chris’s words “to be the leading source of accurate industry information and knowledge, and to be the recognised advocate for the demolition industry with regulatory, legislative and standardising bodies. To provide members with the tools necessary to be leaders.” 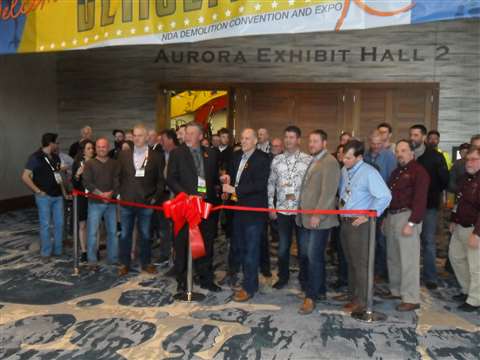 The opening ceremony of Demolition Rockies, with Chris in the front row

During October, however, he will be back on home soil in New England giving the welcome address as the World Demolition Summit convenes in Boston for its first US-based gathering since 2016 and only the second in its history.

Chris’s presence at the event will continue a thread that started with then president Peter Banks – who was a session chairman at the 2016 summit in Miami – and continued through Chris’s immediate predecessor Scott Knightly, who shared chairing duties with Peter and then, having moved up to the presidency, was a speaker on the conference programme in London a year later.

The importance of an annual global meeting point for the demolition industry is not lost on Chris.

“As a member of the Japanese study tour, I had the immense pleasure of socialising with demolition contractors and suppliers from all over the world. The challenges facing the US demolition industry are the same for the rest of the world – increasing regulations and decreasing labour pools are two of the largest. So I would encourage everyone to spend some time [in Boston] and get to know our counterparts.”

Immediately after the World Demolition Summit, the NDA will host a risk management conference in the same Boston venue as part of the education remit that is so close to Chris’s heart, and it is hopeful that summit delegates will take the opportunity to stay on and attend.

The association also recently announced a collaboration with the US Army Corps of Engineers (USACE) to advance best practice in demolition. The partnership will give USACE access to NDA education and training programmes and provide companies and workers with the skills and knowledge required to mitigate risk and enhance opportunities for success.

In return, access to risk management best practices and resources through USACE will give NDA members the tools to offer safe and reliable demolition support, while NDA members will benefit from USACE training.

Another recent announcement concerned the introduction of a safety award named in honour of the late Mike Casbon.

Mike was one of the NDA’s go-to health and safety people with 25 years of industry experience to draw on, but his untimely death in March at the age of 53 robbed the association of a true expert.

Fittingly, the NDA remembered Mike at its Demolition Rockies expo just a few days later, and its next convention in Austin, Texas in February 2020 will see the first presentation of the award.

This will be the second time in three events that Austin has hosted and reflects the success of the Live Demo outdoor exhibit that was first added to the programme at Austin in 2018 and repeated successfully at Demolition Rockies earlier this year.