Interview: Loxam and the secret behind sustainability

AI speaks with Paul Rankin, Loxam PAD’s COO and managing director of UK-based Nationwide Platforms, about sustainability and the changing landscape of access. 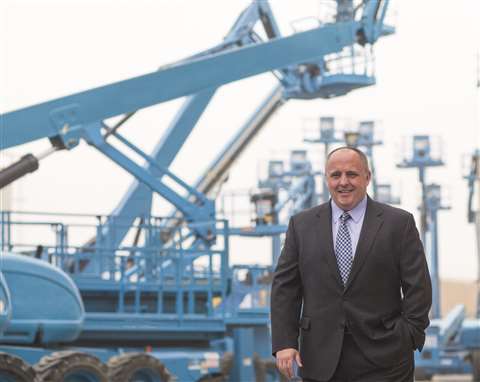 Times have changed quickly for Paul Rankin, who was appointed managing director of the UK’s largest access rental company Nationwide Platforms in October 2020, having moved over from Nationwide’s sister operation in the Middle East, Rapid Access, which he headed up for the previous six years.

Then, in November last year he was handed the reins of parent company Loxam Powered Access Division (PAD) as its COO, when its former CEO Don Kenny took retirement.

As such, Rankin has built up a wealth of experience in the international powered access industry, and in this interview he shares his views on of its its most pressing issues; that being sustainability and the demands it is making on the modern access market.

Loxam PAD and its UK wing Nationwide Platforms specifically has lead the way in access industry safety initiatives over the years, and is now playing a significant role in developing the next step in access equipment rental.

Previously based in Dubai, Rankin has considerable knowledge of the differences between access markets around the world and their stages of maturity, when it comes to the question of sustainability. “In the Middle East, as you can imagine for many different reasons, sustainability is not really a big driver.

Rankin adds, “If you split Loxam Group into Europe, and then the Middle East and internationally – those being the businesses in Latin America and North Africa - there’s nothing happening [in that latter group] from a sustainability point of view. I’m sure it’s on people’s radars but from a customer point of view, there’s nothing driving that.”

The situation is the polar opposite in the UK and other parts of Europe. However, says Rankin, in comparison to its relatively recent past, the UK is very different too. “Ten years ago, it was all about safety. It was all about making sure people were safe and operators were using the machines correctly. 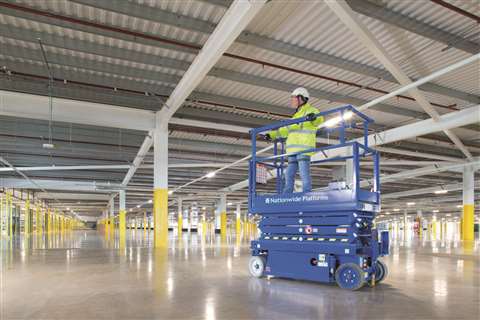 “Now, safety is a given - the customers and end users expect that, and safety is no longer the feature that differentiates you from competitors.

“The market is changing. The customers are driving this agenda and we need to make sure that we can execute it to their requirements.” As Rankin adds, “What we are now seeing is a huge move towards CSR (corporate social responsibility); and what you’re doing in relation to that as an organization, around fleet, machinery and green development. It is definitely at the forefront of what customers are asking for in regards to value proposition.”

There are a number of initiatives that Nationwide is focusing on in this area for 2022 and beyond, including a large level of capex spend on green machinery.

One of those initiatives is ‘green depots’, which are set to provide localised environmentally-friendly services to customers across the UK. “We’re doing a lot of work around our depot infrastructure, for example opening a green depot in the centre of London, where machinery up to a certain size will be catered for.” It will house electric and hybrid equipment, along with a range of other offerings, such as recycled rainwater through to environmentally-friendly coffee cups, on the one hand, and reigning back on diesel delivery vehicles on the other.

Green depots will follow in the cities of Birmingham and Manchester, to “serve those mega metros with local depots,” says Rankin.

From a fuel point of view, Rankin believes HVO is the way forward and it is being trialled at a number of Nationwide depots. In addition, “Where it’s difficult to be sustainable with large trucks and transport equipment around the country, we are making sure the machines are Euro VI compliant.”

Apart from green infrastructure, the direction from the Loxam Group board, of which Rankin is a member, is that all new machine acquisitions, wherever possible, should be electric or hybrid. “The instruction is that a green machine must be purchased before a diesel, full stop, regardless of the pricing premium - even though you don’t get the return for it, as the customers are not paying for it.”

While this kind of investment plan might seem to create a competitive disadvantage in the short term, Rankin explains that Loxam’s policy will ultimately become the norm, and embracing it sooner will be an advantage. “A lot of big cities are looking to become greener and more eco-friendly. The restrictions we already have in London, will be introduced around the country. “You will have to be green and customers will have to pay for it, and by then you will also have scale of production as well.”

While the company’s direction is clear, there is no specific timeframe – for example, there is no 2030 charter. “The market is so dynamic and it is changing. A lot of it will be driven by R&D by the OEMs - if they are investing heavily in green machines, by default that date will come sooner. If the R&D is not happening that date will slip.” And apart from anything else, site infrastructure for electric equipment is not there to support it.

Green charter dates have also been delayed by the challenges surrounding Covid-19, adds Rankin. “If you look at OEMs today; you put in an order and you won’t get the kit for 12 to 14 months. “There’s a global supply chain issue. That’s why it’s difficult to set a date; you can have aspirations but setting a time limit is difficult.” (Read more about suppy chains below the box).

Expanding on the supply chain issue and the role OEMs have played in it, Rankin comments, “The OEMs have been through a torturous time. The supply chain has been brutal for the last 18 months and will be for the next 18 months, at least. We are all in a position where we are just trying to get back to normal.”

Could the OEM’s have done things differently? “From the point of view [of Covid-19] you would say the OEMs are 100% the right, and I completely understand their position. “Where I would question them; if you go back one to three years pre-pandemic and look at their R&D commitments to green machines, it was very varied.

“Do I think they could have done more then? Possibly. But, do I think right now they are doing the right thing, just trying to get the supply chain to operate? Then, yes they are. Hindsight is a wonderful thing.” 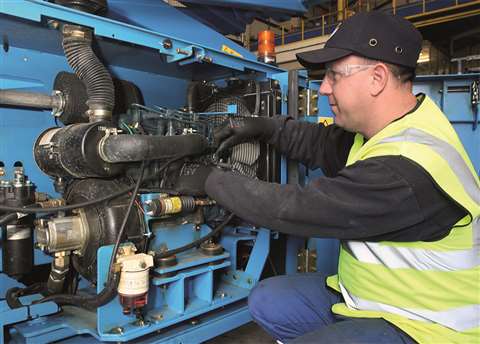 Playing a crucial role in the green revolution is telematics and specifically the data, and, in the end, environmentally-friendly equipment and telematics must go hand-in-hand.

“We are seeing a shift in the data, “Rankin notes, “There is data by the million, but I am talking about MI (management information). Customers want MI; they want to understand more about their machines and how they operate, who they are operated by, how long has the engine been running, how long has it not been running; are there too many machines on site and how do they optimise that number.”

In response to this, Nationwide is making a huge investment, that will see company install telematics across its entire fleet. That amounts to retrofitting telematics on 12,000 machines over the next three months. When you consider just 2,500 units in the fleet had these capabilities up to now, the investment is incredible.

The retrofitting is being carried out by the OEMs. “I’m on the board,” says Rankin, “And I was asking for this investment. We discussed the pros and cons, but it was a no-brainer in the end. If you lead the market and customers are asking for it, why would you not do it?

“While we have not set a 2030 charter, what we are doing is setting the enablers for this path. For example, by having proper MI to inform around decision making.”