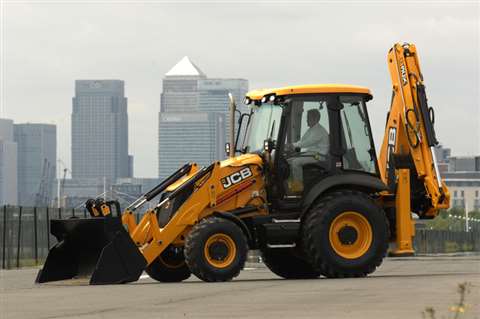 Following its preview at Bauma, JCB has launched its next generation of backhoe loaders. As well as sharp and aggressive styling and a more automotive feel, the new 3CX and 4CX backhoes are fitted wit

According to JCB, the global equipment market fell -46% last year, so with its own sales falling by only -33%, it increased market share. The company says it now enjoys an overall share of 12.2% in the products it manufacturers - its highest ever. It also says it has a 28% share in the global telescopic handler market and a 40% share in global backhoe loader sales.

JCB chairman Sir Anthony Bamford said, "2009 was hugely challenging for the construction equipment industry. The entire JCB organisation pulled together magnificently to respond decisively to the unprecedented downturn, which was particularly severe in the first half of the year. Tough action was taken to adjust our cost base to align it to a much reduced level of demand, and this resulted in an improving profit trend as the year progressed. We have created a strong platform for renewed profitable growth."

He continued, "Despite the economic difficulties, we continued to invest in new products, with 11 innovative machines launched so far this year including the most fuel efficient backhoe loader we've ever produced."

Sir Anthony also said that in the first half of 2010, the construction equipment industry has seen a "strong recovery" in emerging markets such as India, Brazil and China, although the traditional markets of Western Europe and North America remain weak.

He added, "On balance, we expect to see a significant improvement in both sales and profits this year compared to 2009".