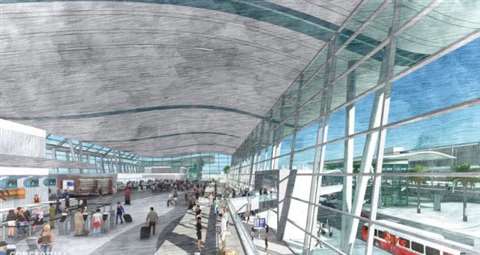 An artistic impression of what the new terminal could look like

A contract to build a new US$2.265 billion airport terminal at San Diego International Airport in the US has been awarded to a joint venture of Turner and Flatiron.

Construction on the 1.2 million-square-foot building with 30 gates, which will replace the existing 1960s era terminal, is scheduled to begin in late 2021 once all environmental permits are issued.

Both Turner and Flatiron are subsidiaries of giant German-based infrastructure group Hochtief, which placed in the top ten in International Construction’s rankings of the world’s biggest contractors by sales in 2019.

According to a press release from Hochtief, the terminal will offer a range of sustainable and energy-efficient features and a series of airfield improvements, including new and redesigned taxiways which will help reduce aircraft taxiing times, resulting in reduced greenhouse gas emissions.

The Turner-Flatiron team has completed previous work together at San Diego International Airport and at airports in San Francisco, Oakland, Sacramento and Denver.