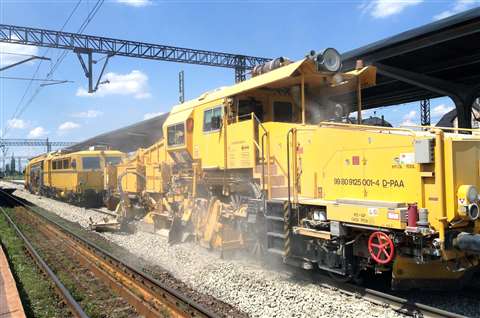 Porr has secured its largest rail contract to date in Poland.

The €116 million project, awarded by the Polish railway infrastructure manager PKP Polskie Linie Kolejowe, is for the modernisation of the Oświęcim - Czechowice-Dziedzice railway section in southern Poland.

It is part of the Nr. 93 railway line between Trzebinia and Zebrzydowice, which was said to be essential for the transportation of both people and goods, including hard coal from the Upper Silesian mines and the movement of freight through the Czech Republic to Southern Europe.

Karl-Heinz Strauss, CEO of the Austrian-based construction company, said, “As this is a design-build project, our Polish colleagues will get to work on the planning straight away. The draft design should be ready in just six months; all of the requisite construction permits have to be in place at the latest 16 months after signing the contract.”

In total, 63km of track and 106 sets of switches will be replaced along the 21km-long stretch, the complete control and safety system, catenary and 13 level crossings will be modernised, and all of the stations will be fitted with new platforms that offer disabled access. In addition, 45 civil structures including 20 railway viaducts will be upgraded or overhauled.

The work is slated for completion by the end of July 2021.

Since Porr works across various sectors in the construction industry, it has been looking to simplify and standardise the work preparation processes within the group so that building information technology (BIM) can be fully leveraged.

By creating a uniform information basis throughout the group between all process participants, it was said that various scenarios could be simulated and evaluated even in the early phases of work preparation, allowing site managers to select the optimal planning scenario and react flexibly to incidents.

The new working methods were said to shorten construction time and increase adherence to delivery dates, while increasing quality.

Following a pilot phase in which a series of software solutions were tested, Porr decided to use Volz Consulting’s BPO (building process optimisation), which covers all trades within infrastructure construction.

The roll-out phase began in spring 2018 and the two sub-modules BPO Asphalt and BPO Concrete are currently being used by Porr Bau, Porr Oevermann and ÖBA. Since the beginning of the year, more than 400,000 tonnes of asphalt and 46,000m3 of concrete have been paved with BPO at these three companies.