Liebherr harbour mobiles in the Americas 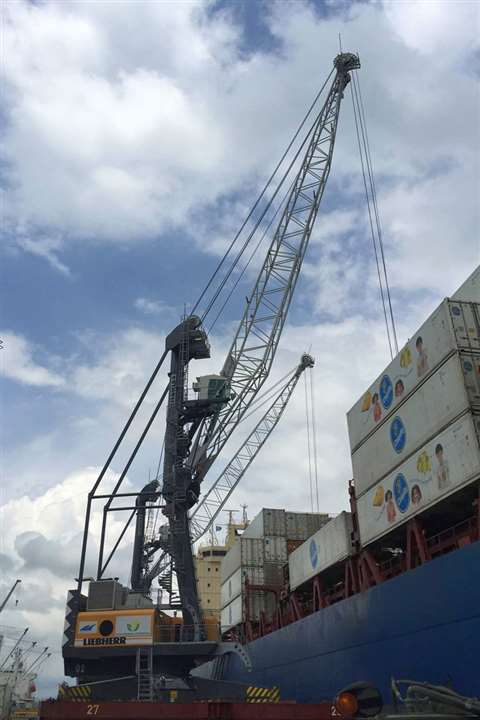 Three LHM 420s have been handling containers in Guatemala since 2014

Several Liebherr mobile harbour cranes in the LHM series have recently been delivered to customers in the Americas and the Caribbean.

Models include a LHM 600 for Terminal 4 in Argentina, two LHM 600s to Chile, a LHM 550 for Brazil and further orders for Haiti, Jamaica and Suriname.

The LHM 600 for Terminal 4 in Buenos Aires has a tower extension to ensure a tower cabin height of 37 metres. The mobile harbour crane is the seventh LHM for the company and its third LHM 600. The two LHM 600 models for Puerto Lirquén in Chile are also fitted with tower extensions. The LHM 550 for Termaco in Fortaleza, Brazil, was delivered in the summer of 2015. It has a 54 metre boom and will mainly be used for container handling.

Models for the Port Lafito in Haiti include two LHM 420s. Both cranes are fitted with Liebherr’s fleet management system LiDAT. A type LHM 420 has also been delivered to Tropical Shipping in West Palm Beach, Florida. Kingston Wharves Limited in Jamaica will receive a new LHM 550 later this year. In addition, a LHM 280 has been delivered to N.V. VSH Transport in Paramaribo, Suriname.

For 2016, a LHM 800 will be delivered to Montecon in Uruguay. The model has an outreach of 64 m and can service container vessels which are as wide as 22 container rows, the manufacturer said.