Liebherr lifts its own at Rostock 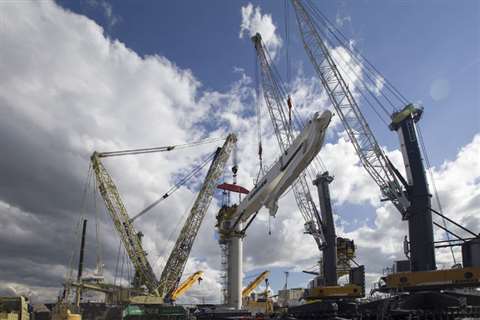 The Liebherr RL-K 7500 subsea crane is lifted in a single lift in Rostock, Germany

The RL-K 7500 subsea crane lifts 300 tonnes and can handle loads down to a water depth of 3,600 metres. It has a working radius of up to 50 m, a rope diameter of 82 mm and maximum overturning moment of 75,000 kNm. It has a dead weight of 665 tonnes. It is fitted with Heavetronic and Pactronic systems and has an active heave compensation (AHC) system to monitor and predict vessel movements. A result of this is that the system does not need to be manually adjusted and is independent of weather conditions, the manufacturer said.

The crane has a patented horizontal winch shifting system, which guarantees the ideal fleet angle of the rope under all load conditions in both hoisting and lowering operations, the manufacturer said.

The RL-K 7500 can be installed on board drillships and heavy lift vessels. The knuckle boom of the RL-K 7500 is designed for use in hazardous areas. In addition, the crane can have an Arctic temperature package, allowing for operation at temperatures down to -40 degrees Celsius.

The RL-K 7500 is now waiting for its scheduled delivery in mid-November to be shipped to Daewoo Shipbuilding & Marine Engineering (DSME) in Asia. A Liebherr RL-K 4200 knuckle boom crane will be also be delivered to DSME.