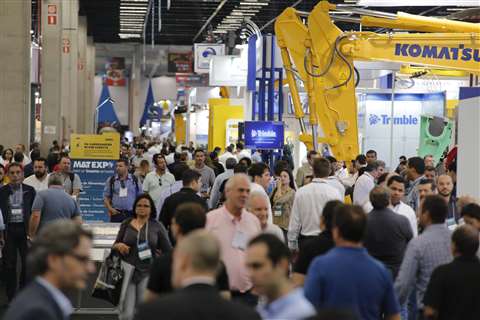 Around 800 construction brands were at the show

The 10th International Trade Fair of Equipment for Construction and Mining (M&T Expo) saw 40,000 visitors at the event, which  was held from November 26 to 29 at the São Paulo Expo Exhibition & Convention Center in Brazil.

A total of 800 national and international brands from 19 countries were said to have been at the event, which was originally scheduled to have been held in June. The show was postponed following a national truck driver strike in Brazil which affected the majority of essential services in the country, including transport, fuel and food supplies.

Falk Senger, managing director of Messe München, said, “M&T Expo has a key role to play for the construction machinery segment in Latin America. This is underlined by the presence of numerous countries, among them the top five nations with the largest number of visitors apart from Brazil are: Argentina, Bolivia, Chile, Paraguay and Peru”.

Earlier this year, the Sobratema Study of the Brazilian Market for Construction Equipment estimated a market recovery. In total, 17,800 units are expected to be sold in 2018 against 12,900 units in 2017.

Three new attractions were created at the fair. At the Demonstration Arena, various newly launched machines were shown live by exhibitors. In the Content Arena visitors could attend 28 market presentations by experts of well-known consulting companies from Brazil and abroad.

The next edition of M&T Expo is scheduled for 2021. It will once again be held at the São Paulo Expo Exhibition & Convention Center.