Dutch lifting and transportation specialist Mammoet recently completed the assembly of the first five test turbines that will be used at Hywind Scotland Pilot Park, the world’s first floating wind farm located at Buchan Deep, 25 kilometres off the east coast of Scotland. 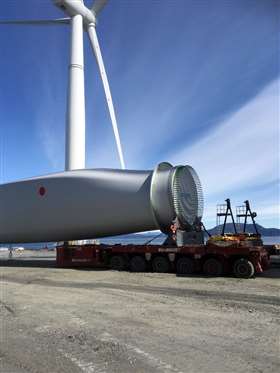 Mammoet transporting a blade, with one of the completed turbines in the background

The turbines were assembled at the NorSea Group’s Stordbase yard at Stord, Norway. Mammoet was contracted by NorSea Group AS for the lifting and transport operations conducted onshore at the yard, and for its specific turbine assembly expertise. “We were responsible for the engineering drawings and the transport drawings, and provided NorSea Group with advice on lifting strategies and planning, resulting in a smooth assembly,” explained Mammoet’s project manager Tom Braakman. 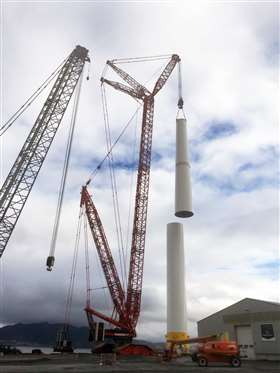 Through this advisory role, Mammoet said it was able to make a significant difference, as Mammoet’s director project sales Europe, Tom Rutgrink, outlined, “Initial estimates showed that the client would need a 1350 ton crawler crane to lift the components. Based on our expertise we were able to come up with an approach that would only require a 1100 ton crane, allowing us to do the job much more efficiently.” 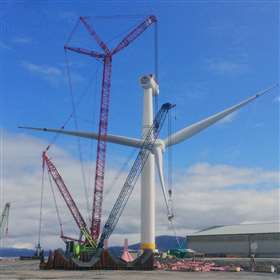 Mammoet used an LR 1100 crawler crane for the rotor assembly

Each of the 6 MW wind turbines had been shipped to Stord in 9 separate components. At the yard, Mammoet assembled them using an LR 11000 crawler crane and 24 SPMT axle lines. When the assembly and outfitting was completed, a crane vessel transported the 1150 ton assembled turbines to floating foundations on a fjord. After the turbines have been installed on the foundations and finally prepared, they will be towed across the North Sea to their final destination. 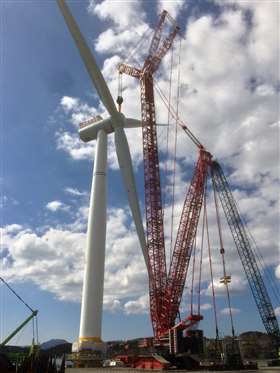