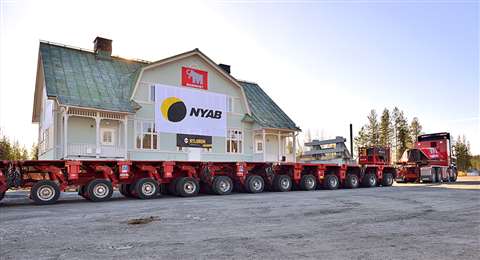 One of the houses on its way to Koskullskulle

Mammoet has finished moving the first houses from the Swedish city of Gällivare to nearby Koskullskulle.

Gällivare was built on iron deposits and the houses in the city have to make way for a mine. Many of the houses are deemed to be of high cultural value so the governmental mining company wanted to move them in one piece.

Preparations went on on for several months. Mammoet’s sub-contractor Nylundh started digging out the soil from underneath the houses in June. Once Nylundh had dug out and fortified each house, it was lowered onto Mammoet’s transportation equipment.

Mammoet used two prime movers and 18 axles of conventional trailers to transport each of the houses across approximately 7 kilometres to their new destination. The houses vary in size, with a weight ranging between 45 and 220 tonnes, the biggest one measuring 25 metres long, 12 m wide and 13.3 m high. The houses that have been moved will now be renovated.

Once the houses are habitable again, the families living in the second set of houses to be moved will be housed there. In total, Mammoet will move 30 houses.

All have to be at their new location at the end of 2017. Among the companies that bid for the job, Mammoet was the only one that could commit to this deadline. Preparations started in June and Mammoet completed the first part of the project ahead of schedule one day before the first snow started to fall.

Most of this was due to the teamwork between Nylundh, NYAB and Mammoet, said Celina Peeters and Roy Högberg from Mammoet. “Our client and our subcontractor have played a big part in making this possible. If the houses were not freed up in the air, we couldn’t transport anything. And if the new foundations hadn’t been ready, we couldn’t put them there. They have done a great job.”