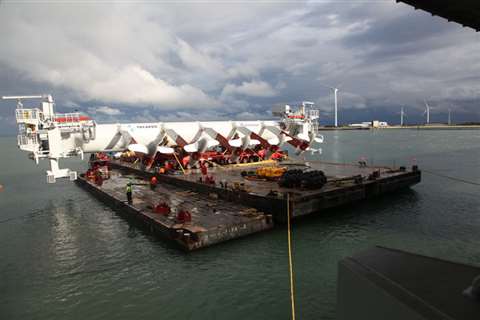 The OTP2 tidal power plant is at the Easter Scheldt storm surge barrier (Oosterscheldekering) in the Netherlands. The work was carried out for Tocardo Tidal Turbines, a producer of tidal and free-flow water turbines used to generate electricity.

Mammoet was contracted to carry out the transportation and installation of five tidal turbines. The turbines were fitted onto a steel structure and measured 50 metres long and 21 m wide. It had a total weight of 500 tonnes.

Installing the turbines on a flood defence barrier meant that it was not possible to drill into its columns. To overcome the challenge Mammoet worked with Huisman Engineering to come up with a solution to secure the structure in place using a pull-rod clamped on to each column. To complete this solution a coupling jaw was placed on each column to guide the TPP into place. This approach allowed a safe, swift and efficient installation, a spokesperson explained. The steel construction was engineered and built by Huisman.

To transport the structure into position, Mammoet used 24 axle lines of self-propelled modular transporter (SPMT) on two coupled barges via water from their fabrication point at Schiedam to Neeltje Jans. On arrival at Neeltje Jans the steel unit was manoeuvred into place ready for installation.

Further challenges included not being able to use conventional anchors due to concerns about damage to the seabed. In addition, the double barge had to be moored 30 m from the surge barrier due to strong currents. To overcome the problem, anchor points from a previous storm surge barrier were used instead and extra buoys were put in place to ensure the anchor lines would not touch the seabed.

Once set up the barge was manoeuvred from its anchor points toward the barrier using winches. The TPP was then secured on the pull-rods.