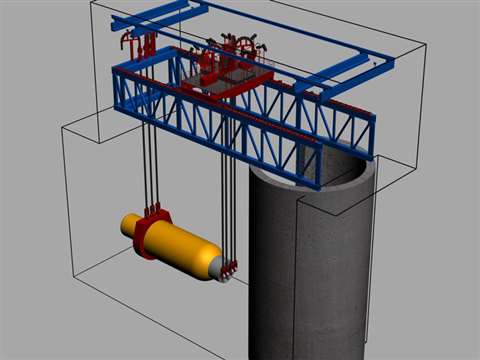 Diagram showing Mammoet's method of handling of a 2,000 tonne nuclear reactor at a power plant in Germany

International heavy lift and transport specialist Mammoet removed a 2,000 tonne nuclear reactor as part of a project to decommission a power plant in Germany. It was a complicated operation for Mammoet Germany to remove the reactor vessel in Jülich.

The plant was a pilot project with a prototype pebble bed reactor constructed in the 1960s. Its purpose was to demonstrate the feasibility and viability of a gas-cooled, graphite-moderated high temperature reactor. It was shut down in 1988 after operating for 20 years. Decommissioned is the responsibility of AVR GmbH and Mammoet was contracted for the design and removal of the reactor vessel.

Prior to decommissioning a large building known as a material lock was constructed over the existing reactor building to allow works to go ahead. The reactor building could then be opened in a protected environment.

Mammoet designed the skidding and lifting equipment to move the reactor vessel from the reactor building into the material lock. The 2,000 tonne vessel stood 26 metres tall and was 7.6 m in diameter. It was lifted from its former position in the reactor building, moved and then placed into a custom-built support frame.

Later in 2015 the reactor vessel will be lifted out of its support frame and moved from its current vertical position into a horizontal one. Following its transfer to a transport frame it will be carried on self propelled modular transporter (SPMT) to a purpose-built storage building where it will rest for up to 60 years before final storage becomes available in Germany.