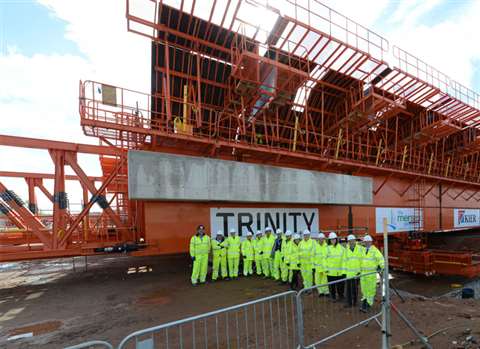 The naming ceremony for Trinity

What is said to be the longest bridge-building machine in Europe has been named in a special ceremony to mark a key milestone for the Mersey Gateway Project in north west England.

While most machines of this kind can only build bridge spans of up to 60m, the MSS for the Mersey Gateway Bridge was specially made so it is able to cast spans of up to 70m.

Merseylink held a competition for staff to name the MSS, with the winning name of Trinity submitted by Lynn Jeary, from the project's communications team.

She chose the name Trinity as she felt it symbolised the three bridge pylons and the three partners in the construction joint venture – Kier Infrastructure & Overseas, Samsung C&T Corporation, and FCC Construcción.

As Merseylink is also sponsored by three major companies – Macquarie Capital, BBGI, and FCC – Trinity was deemed to be a perfect fit.

It has taken construction teams three months to assemble the bright orange machine. It includes approximately 1,200 components, 3,000 actual parts, and is held together by over 60,000 bolts.

Now fully built, Trinity is 157m long and weighs around 1,700 tonnes. It will now build the elevated road viaducts over the Mersey Estuary on both sides of the river, beginning with the north approach viaduct from the launch site at Catalyst Trade Park.