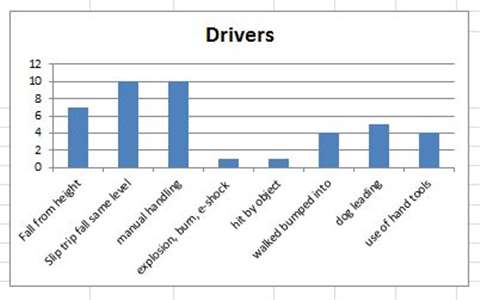 Some of the findings include: ‘target delivery drivers for training and safety initiatives on the safe and effective use of mobile elevating work platforms (MEWPs); watch out for slips/trips/falls at the same level and pay attention to manual handling when working at height.

These form part of the initial findings following a commitment by IPAF rental company members in the UK to report any known accident on the IPAF database, set up last year. They were announced at the Vertikal Days exhibition in Haydock Park, UK, this week.

Loading and unloading of MEWPs is potentially one of the most dangerous activities. About a third of the incidents involved drivers (34.3%, 104). Industry sources estimate that there are approximately one million movements of MEWPs (delivery and collection) by road every year in the UK. Other incidents involved engineers (25.1%, 76), customers (22.4%, 68) and operators (18.2%, 55).

Almost 95 of a total of 125 IPAF UK member rental companies have registered to report MEWP-related incidents at the IPAF database. Those who commit to report and sign off monthly get access to a dashboard that shows their company’s incident figures against the national average, a major benefit for health and safety benchmarking.

Commenting on the findings, IPAF technical officer Chris Wraith said: “It is interesting to see that the initial data has produced no real surprises. The industry is aware of the hazards and risks rental company employees are exposed to, including dog leading, falls from the truck body, slips/trips etc. With this factual data, IPAF can do more to create greater awareness and support its members in reducing the frequency and severity of such incidents. Through focused safety campaigns, we can help drive behavioral change and improve safety throughout the rental industry.”

IPAF CEO Tim Whiteman said the findings were groundbreaking. “Credit is due to IPAF’s UK member rental companies for committing to report any known MEWP accidents involving their staff, and to the combined efforts of the IPAF UK Country Council in championing this project. IPAF is looking to start similar initiatives in other countries.”

To register and to report an accident involving a MEWP (also known as an AWP, aerial work platform) or an MCWP (mast climbing work platform), go to www.ipaf.org/accident