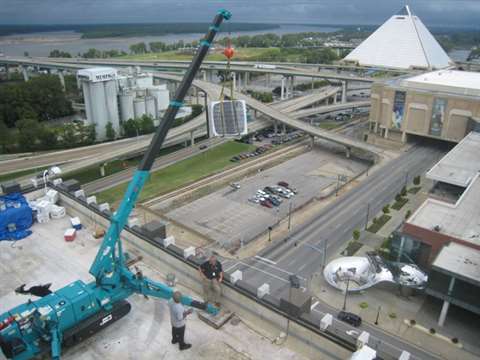 The Maeda MC305 was placed on the roof by a 175-ton hydraulic crane within two to three hours on a Saturday, which caused little disruption with traffic. With the 39-foot boom length, crews are able t

Jessie Bryant Roofing of Memphis, TN was faced with all sorts of challenges in re-roofing the Federal Courthouse Building in downtown Memphis. The building encompasses an entire city block, making it impossible to use a conventional crane to lift materials on the roof and lower debris from the existing roof to the ground.

The solution was to use a Maeda MC305 mini crawler crane on the roof to hoist materials up and down, according to Charles White, president of Jessie Bryant Roofing.

This project, like many downtown projects of this nature, offered a very tight staging area on the ground. On the courthouse there is also a penthouse roof level, which houses the mechanical systems, which is 26 feet taller than the main roof level and required accessing.

Conventional crane access would have required closing three lanes of traffic every day, which wasn’t possible. Completing the job only on weekends would have put the project well over budget. Plus, using a 175-ton hydraulic crane was an expensive option. There was also the problem of containment and storage of the debris generated from the removal of the old roofing.

With the amount of materials to be loaded and unloaded from the roof top – totaling six to seven loads -- the best option was a roof-top mounted hoisting system.

White says the first solution considered was to utilize an A-frame mechanical Smith Hoist, but this option posed several limitations, including limited capacity and limited reach from the edge of the building. And to use this system to reach the penthouse level would require the two of these machines and twice the handling of materials.

White says the company called on Cherokee Erecting to help assess the best machine for the job. The first consideration was a self-erecting tower crane.

“We had used a self-erecting crane from Cherokee Erecting on another project so we called to ask if they had some type of system that would be functional in this situation,” White says. “They came to the project, took measurements and instead offered a Maeda mini crawler crane.”

With the 39-foot boom length, crews are able to reach the penthouse roof level and be far enough away from the building and ground level to not require moving large concrete planters and landscaping that would otherwise have to be disassembled and reconstructed, according to Wayne Bylsma, president of Cherokee Companies.

The unit was small enough that it was placed on the roof by a 175-ton hydraulic crane within two to three hours on a Saturday, which caused little disruption with traffic.

“The mobility of the unit allowed us to drive it across the roof to our designated staging area and the footprint is small enough it doesn’t cause any disruption of the flow of work on the roof with our employees,” White says.

The employees have a comfort level with the mini crawler due to the safety over-limit features. The machine also has a remote operating feature, White says. Cherokee Erecting performed a hands-on training session that all operators on the job attended.

“Operation of the crane after a couple of hours use is seamless,” says White.

The dual power source capabilities of the crane offered the option of using electrical power accessible from the building’s mechanical room. “By running on electricity we can operate the crane during normal business hours without disrupting the courtrooms on the 11th floor directly below our work area,” White says. “Every facet of the machine has been beneficial in the success of this roofing project in a very difficult set up. In downtown environments where access is limited the mini crawler Maeda MC305 is a very viable option.”