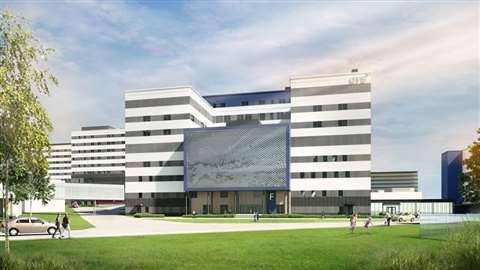 Swedish construction company NCC has won a SEK 1.3 billion (€127 million) contract for the second phase of the new Oulu University Hospital in Finland.

The contract was awarded by the Joint Municipal Authority of the Northern Ostrobothnia Hospital District and will see the contractor erect what is currently being called ‘building F’.

Catarina Molén-Runnäs, Head of NCC Building Nordics, said, “To construct large, state-of-the-art hospitals featuring the latest technology places high demands on us as contractors and on our customers, and therefore collaboration is crucial.

“Our successful cooperation with the Joint Municipal Authority of the Northern Ostrobothnia Hospital District will be a great foundation to build on as we embark on the next phase.”

NCC, which was also awarded the SEK 1,100 million (€107 million) contract for the first phase of the new hospital back in 2019, will start preparatory works for building F in January 2022.

Building F will measure 33,000m2 and will include a laboratory, pharmacy, imaging facilities and an oncology ward and outpatient clinic.

With the company’s work on the first phase of the project, which comprised the erection of ‘building A’, expected to be completed in roughly a year’s time, building F is currently scheduled for completion in 2025.

“It’s great that we can utilize the project management processes, tools and design solutions, that we have developed and executed together during the first phase”, says Kari-Pekka Tampio, Program Director of the OYS2030 programme.

Development of the new Oulu University Hospital is part of the €1.6 billion Future Hospital OYS2030 programme. A major project in Northern Finland, it aims to create “the world’s most modern” - and the smartest - hospital in the city of Oulu.

The OYS2030 programme will take a total of 15 years to complete and will involve the renewal and refurbishment of multiple structures.

While the completed project aims to reduce maintenance costs, increase energy efficiency, improve patient safety and grow the hospital’s productivity, construction of the hospital also includes a focus on reducing its impact on the environment for its entire life cycle.

Contractors involved with the project’s other phases include Caverion and Skanska, which are working on ‘building B’.