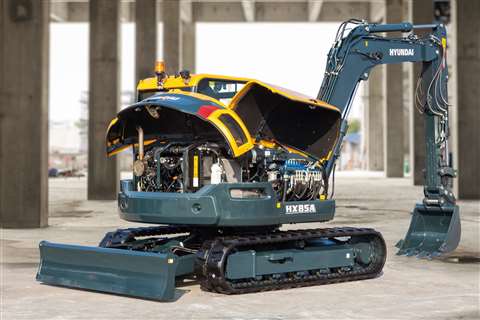 Hyundai has announced the introduction of its new HX85A compact excavator to the UK and European markets.

The company says the new machine in the 8-9 tonne class was developed following dialogue with customers who wanted a powerful excavator to work in urban environments.

The HX85A has a 49.9kW Yanmar engine, which delivers 66.9hp. Hyundai says the engine helps enhance the machine’s efficiency, as well as improving fuel economy and reducing engine noise. 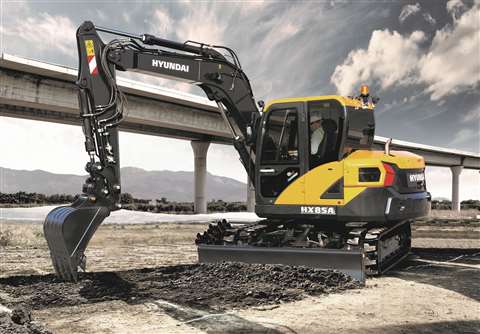 The HX85A compact excavator in action

Hyundai highlights the excavator’s two-piece boom, which allows the arm to extend to 7.48m and work efficiently at close quarters. A maximum digging depth of 4.66m is achievable, while levelling can be undertaken by the machine, with the introduction of an optional 4-way angle blade.

The tail swing radius has also been reduced to 1.6m (measured from the centre of the machine), allowing for work in confined space, but the cabin, says Hyundai, is nonetheless spacious and ergonomic.

Peter Sebold, Product Specialist at HCEE, said, “The new HX85A is perfectly equipped to answer customer demands for a compact and versatile machine that can show its muscles on job sites where space is tight, and performance is key. It is proof that Hyundai CE has finally become an established player in the segment of power utility machines.”