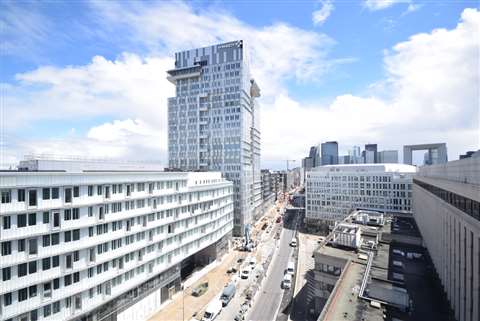 French construction and concessions giant Vinci is about to complete the construction of its new headquarters on the outskirts of Paris.

Before the end of the year, 4,000 Vinci employees will move into L’Archipel, a five-building complex that has taken three years to construct and includes 74,000m2 of office space 1,500m2 of retail space.

Vinci says a host of innovations were employed in the development of the project, ensuring it met the company’s ambitions for it, which included the limiting of urban sprawl and maintaining a controlled environmental footprint.

In terms of the buildings’ construction, L’Archipel represents the first use for Vinci of recycled concrete and ultra-low-carbon concrete within structural elements.

Working together, Vinci Construction France and Eurovia (a Vinci subsidiary) used concrete comprising 50% aggregates from the demolition of concrete structures.

The companies also exchanged standard concrete for a mixture comprising almost entirely of blast furnace slag, a by-product of the production of steel.

Vinci says the introduction of the concrete alternative reduces greenhouse gas emissions by more than 60%, compared with standard concrete.

The new Vinci HQ’s sustainability credentials are further enhanced by the use of techniques including:

Vinci says the new building complex will also incorporate some 240 cycle stations, allowing staff to make use of the €150 million cycle network currently being developed in Paris.