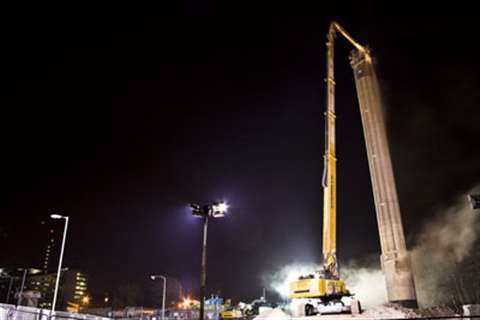 Demolition of a 60 m (197 ft) tall chimney provided the perfect opportunity for Birmingham, UK, based contractor Coleman & Company to deploy what is currently the largest high reach excavator in the UK, its 220 tonne Liebherr 984, modified to carry a 65 m (213.3 ft) telescopic boom. Working at night to avoid creating hazards for a nearby main railway line, and with only an allocated five hours work time each night, the work was completed with just three nights access being required.

The chimney was the final stage of the demolition of an old coal fired power station at the old Queen Elizabeth hospital in Birmingham. The demolition was required as part of the development of the new showpiece Birmingham New Hospital. Coleman was brought on site to demolish the boiler house complex, with the concrete framed structure first being brought down prior to the chimney demolition by Coleman's Cat 350 with a 4 m (13.1 ft) boom insert carrying a 6 tonne Cat P40 pulveriser, a Liebherr 954 mounted with a 5 tonne Verachtert VT50 shear, and a Liebherr 944 and a Volvo 360 fitted with grabs and pulverisers.

The location of the site posed other challenges for Coleman, in addition to the proximity of the railway line. The site was positioned between the railway and two 1.06 m (3.5 ft) diameter underground high pressure cast iron water mains to the city, requiring the provision of careful protection measures for the water mains and ruling out the use of explosives to bring the chimney down. Remote control demolition techniques were applied to the demolition of the concrete deck of a service bridge over the two pipelines, with the supporting steel structure then being lifted clear.

All the concrete demolition debris was processed on site to produce DOT 6f2 specification material that will be used on new construction projects.