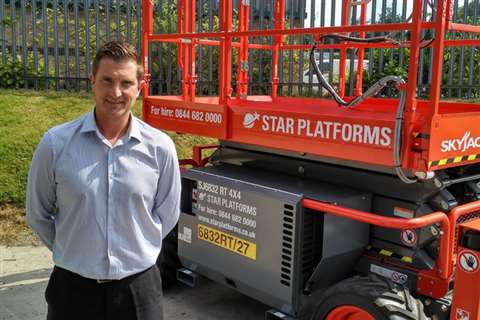 Mr Mitchell has been in the industry since 1999, beginning his career erecting towers at Instant Zip-Up before moving to Panther and then Nationwide Platforms in office and management roles, and joining Star Platforms a year ago.

Managing director Steve Simmons commented, “Star has benefited massively from his involvement this past year, including working hard to achieve FORS Silver accreditation.

“Ian holds a CPC in transport management and whilst initially focusing on transport, H&S and other areas of compliance, his involvement and influence within the business continues to grow and it was only right to officially promote him to a member of our board.”

Mr Mitchell added, “I jumped at the opportunity to re-join many of my former colleagues and the management team at Star Platforms last year and it has been very exciting to be a part of such a growing business, and one that always has the customer at the forefront of everything we do.”

Star Platforms launched in October 2014 and has three depots in Bedfordshire, Kent and Leicestershire with a combined fleet of 660 machines. It serves the UK through its membership of The Access Alliance.