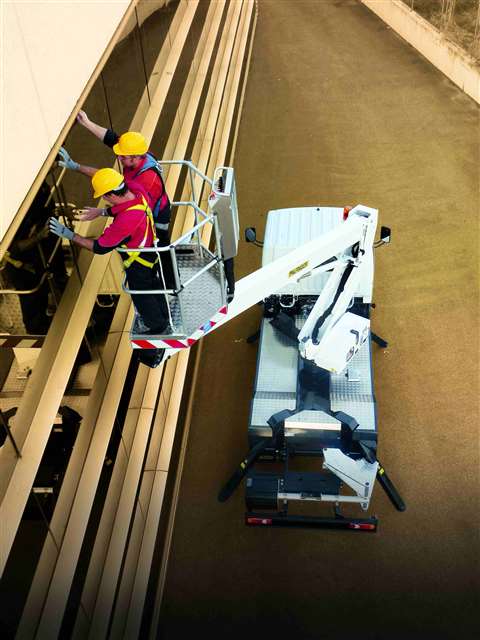 The P140T is the second model in the compact Smart range and follows the The 3.5 tonne, 19.8 m working height P200A Smart launched at bauma in April.

It was developed and designed in Modena in Italy by Palfinger Platforms Italy S.r.l. The joint venture between Palfinger Group and Italy-based Sky Aces was set up in February this year to produce 'mid-market' platforms and truck bodies. Palfinger holds a majority share.

As Palfinger Platforms' Marco Guerra explained to AI at the GIS exhibition in Piacenza, Italy last week, an important feature of the range is that it is fully hydraulic, with the only electronic offering being a start/stop function.

He said the range would be extended further with a 24 m working height model later this year, making a range of three telescopic models. To buck the trend, Mr Guerra said the joint venture would then work on an 18 m articulated model.

The P140T has a lateral outreach of 8.4 m and total weight including truck of 3.2 tonnes. It was first shown at the JDL trade fair in France and the GIS exhibition, both of which ran between 26-28 September.

Its telescopic boom can rotate through 370°, while the basket can turn 2x 90°. It is particularly useful in inner-city applications with high traffic volume and limited space, said the company, thanks to a length of 6.05 m and total weight of 3,200 kg.