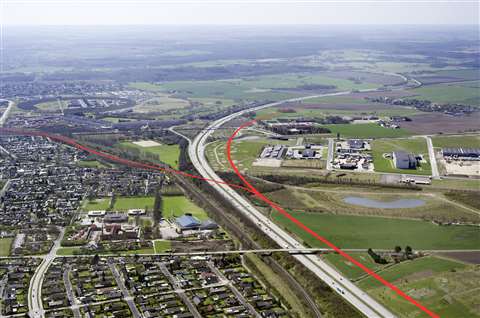 Denmark's national rail authority Banedanmark plans to build the country's first high-speed railway between the capital, Copenhagen, and the municipality of Ringsted in the south, via Køge.

Budgeted to cost €1.3 billion, the 56km new line will handle passenger trains running up to 250km/h once construction is complete in 2018.

The existing line that runs from Copenhagen to Ringsted via Roskilde is one of Denmark's busiest routes. It is used by commuters between Copenhagen and the rest of the island of Zealand, as well as for nationwide and international passenger and freight traffic.

The project will also form part of the Trans-European Network that will link Scandinavia and the rest of Europe, and as such it is in line to receive TEN-T funding from the European Commission.

Construction will include four tunnels and 88 bridges as well as moving 3.3 million m3 of earth. It will also include the expropriation of 2.9 million m2 of land, including around 22 buildings, and the relocation of over 600 utilities such as electricity pylons and gas pipelines.

Banedanmark's Copenhagen-Ringsted project director, Jan Schneider-Tilli, said, "Construction projects of this magnitude are very rare in Denmark. We have benchmarked the budget against comparable European projects, and divided up the tenders into bundles ranging in value from €30 million to €200 million.

"This way we are moving away from the tender strategy of awarding two or three big contracts - like you see on some high-speed rail projects in France, for instance - which could price out local contractors."

The first contracts are expected to be awarded this summer, with further tenders completed "as soon as is reasonably possible" thereafter, according to Mr Schneider-Tilli.