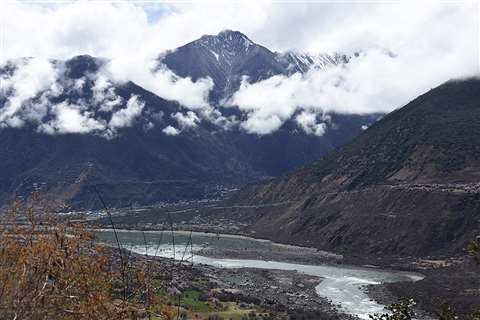 View of the Yarlung Tsangpo River, where Chinese engineers are currently carrying out a tunnel project on which they are testing techniques for a potential Tibet-Xinjiang tunnel

Chinese engineers were said to be testing techniques for the building of a 1,000km tunnel that would divert water from Tibet to the Xinjiang region in China.

With the potential to be the world’s longest tunnel, it would drop down from the highest plateau on earth in multiple sections that would be connected by a series of waterfalls.

It is estimated that the tunnel would deliver between 10 and 15 billion tonnes of water to the Taklimakan Desert in Xinjiang every year, transforming what is now largely uninhabitable land into an oasis that would support more than 30,000ha of new farmland and provide 3.4 million jobs.

However, this would come at an estimated cost of about US$1 billion per kilometre of tunnel, due to the difficult terrain and taxing altitude of the Tibetan Plateau.

In order to develop solutions to the challenges of such an ambitious project, the Chinese government is currently carrying out a tunnel-building project in the Yunnan region, which began in August of this year.

Zhang Chuanqing, a researcher at the Chinese Academy of Sciences’ Institute of Rock and Soil Mechanics, said, “The water diversion project in central Yunnan is a demonstration project.” It is intended to give politicians confidence in the viability of the Tibet-Xinjiang scheme.

The Yunnan project comprises more than 60 sections that will pass through mountains in an area of geological instability, and will carry more than 3 billion tonnes of water each year from northwestern Yunnan to the dry centre of the province.

The tunnel and its support facilities will take eight years to build at an estimated cost of 78 billion yuan (US$11.76 billion).

However, one issue with the Tibet-Xinjiang tunnel that will be beyond the engineers’ ability to resolve is a political one.

The Yarlung Tsangpo River that China would be diverting runs into India, where it turns into the Brahmaputra.

Any project that diverts water from upstream Brahmaputra is likely to rile up both New Delhi and Dhaka, as the river is a major water resource for both northeastern India and Bangladesh

Lobsang Yangtso, a research associate at the non-profit coalition International Tibet Network, said, “There are currently no water treaties between India, China, and Bangladesh. India will certainly have to take a strong stand as far as this project goes, as it can be disastrous for India and Bangladesh.”