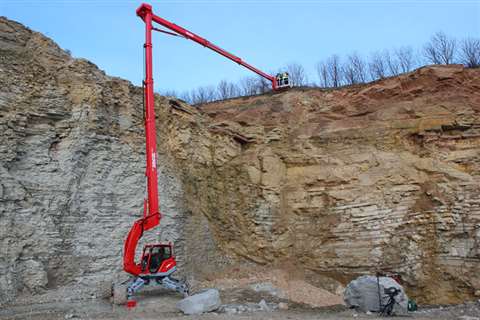 Teupen has received its largest single order in the UK from Higher Access - the first owner of the new Puma 42GTX extreme RT excavator chassis platform.

Higher Access has ordered a 20 machine package, following a similar number purchased over the past two years, containing Teupen´s latest developments of its Leo series.

It includes many of the articulating models Leo 21GT and Leo 24GT, as well as some of the new straight boom T-Series, the Leo 31T and Leo 35T machines which complement the existing Teupen models run by Higher Access.

Furthermore, Higher Access will become the first rental company worldwide to take delivery of the new Puma 42GTX, a unique combination of aerial lift with walking excavator chassis which Teupen first unveiled at Bauma 2016 in Munich. With two machines initially in 2016, more machines will follow in 2017 and 2018.

“We are happy that Higher Access has continued to invest in Teupen products over the past ten years,” said Craig Rooke, sales director Teupen UK.

"Our philosophy at Higher Access has always been to supply premium equipment. Teupen have supported us and made purchasing from them easy,” said Lucy Reynolds, divisional director of Higher Access. “Being part of Vp plc has allowed us to develop this longer-term investment strategy which benefits us all and is in tune with Teupen’s ethos of creating a varied model range from modular components, leading to reductions in spare parts and increased utilisation.”