Pushing the boundaries - excavators for the demolition role 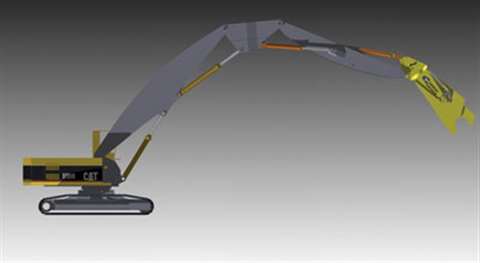 Computer rendering of the latest demolition special under construction at the Rusch factory in Amsterdam. A modified Cat 5130 with a 34 m boom will carry a 25 tonne shear

The star of the high reach world over recent months has undoubtedly been the 90 m (295 ft) giant that was recently handed over by Rusch Krantekniek to Dutch contractor Euro Demolition. D&Ri has carried considerable editorial covering this machine over recent issues, but in an update on the progress of the machine, Rusch managing director Ruud Schriejer said that the machine is now back with him to have the control system upgraded. Initially it was thought that full electronic control of the machine's functions could be achieved using a single control system, but practice has apparently demonstrated that optimised control could only be realistically achieved through the fitting of a secondary electronic control system to share the workload.

But Rusch is not resting on its laurels. Work is well advanced on yet another special - this time a modified Caterpillar 5130 shovel that will sport a 34 m boom designed to carry a 25 tonne shear attachment. Boom fabrication is well advanced and modifications to the carrier are due to start shortly. Mr Schriejer said that he expects this machine to be completed by the end of June, 2009.

While many OEMs are currently experiencing a serious drop in demand for their standard construction equipment, it appears that at the moment there is still a healthy demand for specialist niche equipment typified by demolition high reach excavators and their demo spec'd standard brothers. While the numbers involved are not massive, new machines are constantly being added to fleets and the industry still appears sufficiently buoyant to pay the premium that these specialist units can demand.

According to JCB, there are always requests to reach higher and carry heavier tools at reach. But the company has identified a new one. It told D&Ri that interestingly there has been a concerted focus on safety and machine control, driving it to develop more integrated solutions as an OEM. It said that it also continues to develop mid-range machines to deal with the increasing levels of material handling and recycling required by our customers.

Komatsu's Simon Saunders told D&Ri: "Komatsu understands that customers need their machines to be earning income as effectively as possible. This demands strong versatility and minimum disruption to machine operation. Komatsu listened to these demands and responded with the latest generation Dash 8 machines. We understand that customers are interested in reduced project time and that increased attachment weights are seen to be one way to achieve this. We believe that, whatever the size of carrier, there is a practical limit to the maximum height that can be reached from ground level while carrying a significant attachment weight and that extreme working heights will continue to demand alternative techniques."

Volvo's take on tool size was similar. It said that in general it expects to see more focus on heavier tools for high reach and expects this trend will play to its strengths, with the optional hydraulic variable undercarriage it offers since this allows users to work equally over the side of the machine without de-rating the tool size as is typical with standard undercarriages.

Given that just about every manufacturer recognises the demand for higher reach and heavier tools, it should be interesting to watch for some product launches over the next months - will they accept the engineering challenge?
Equipment Excavators Demolition Excavators Demolition & Recycling
Related Articles