Pushing the limits for wind tower construction. Part two of the feature on tower cranes used for this niche application from contributor Heinz-Gert Kessel.

Making greater use of wind energy to generate electricity helps reduce carbon dioxide emission into the atmosphere. Developers are constantly striving to increase efficiency and therefore the viability of wind turbines as a means of production. Tower cranes can be a positive contributor helping to achieve this.

This second part of the report is a market overview of recently developed tower cranes for wind turbine installation. All of the cranes discussed are of the luffing jib type.

As demonstrated by the number of specialized cranes delivered for wind turbine installation, Krøll is the most experienced manufacturer after Liebherr. The Denmark-based manufacturer’s original K1500L design was quickly updated. It became the K1650L crane, which offers easier erection and transportation.

Krøll K1650L is an update of the K1500L design, making for easier erection and transportation

Most Chinese wind turbine installation tower cranes for their home market can be traced back to the basic Krøll design features as follows: 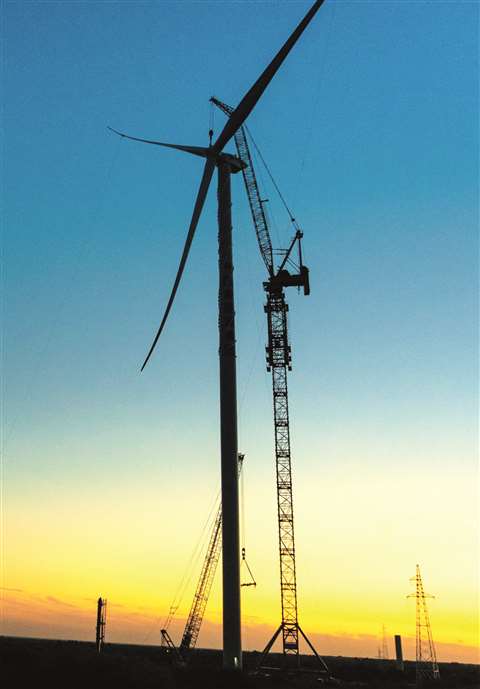 Huadian Machinery Research Institute entered the market in August 2020 with the similar FZQ1650. It claimed a 180 metre free standing hook height with a 135 tonne capacity and has a larger tower system with shorter sections than the others.

Without modification a 150 tonne FHFQ1700 built by Finehope was used for turbines below 140 metres. A modified FZQ2400 with more freestanding capacity, thanks to a new wider tower system, was used to raise 2.5 MW turbines with 140 metre hub heights.

New Krøll
The design is finished for a Krøll K1850L providing a 193 metre free standing under hook height with 130 tonne load.

Also on the drawing board at Krøll is a compact, erection friendly, transport-optimised hydraulic luffer. It is in the 1,400 tonne-metre class with a capacity of 150 tonnes and 205.5 metre hook height. It combines features of ram luffing jib cranes from the offshore industry with a climbing tower.

Japanese manufacturer Kitagawa proposed in 2018 an improved version of the JCL1000NK, its largest climbing luffer. With a 33 tonne capacity at 29 metres radius, this allows erection of turbines with components up to 75 tonnes at 13 metres radius and a freestanding hook height of 110 metres to comply with strict Japanese earthquake regulations.

Improvements promised with the new JCW1100K in Kitagawa’s K Series are claimed as follows:

A compact and strong tower system climbable through the slewing ring, right from the base level. Two tower sections can be inserted at a time, forming a 15.2 metre unit for speedier climbing.

Demand for a capacity of 140 tonnes to build current and future turbines in Japan saw Kitagawa test the largest heavy lift tower crane in Japan, the JCW1800K in May 2020. It offers a 140 metre freestanding hook height and lifts 140 tonnes at a 12.5 metre radius.

Under a lower earthquake resistance code of PGA 0.1G, freestanding height could be extended another 15.2 metres on the same 2.05 x 2.05 metre mast. On test with the 88.4 metre freestanding mast it showed a 1.4 metre deflection when lifting the full 140 tonnes at 12.5 metres radius.

The crane lends itself for most turbine installations and for infrastructure, industrial jobs or ultra-high skyscraper projects above 300 metres. The same basic crane can be transformed as follows: 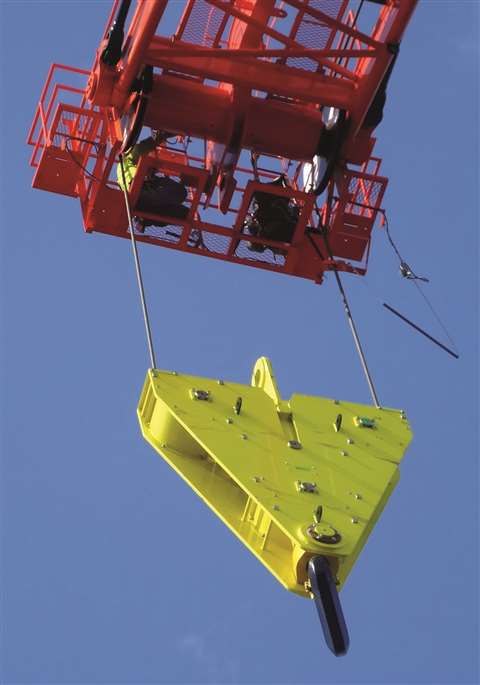 The JCW1400K to JCW1800K model range was developed with wind turbine installation in mind. They are supposed to be installed on a modular cruciform base of 16 x 16 metres or 19 x 19 metres, depending on the required free standing tower height.

Thanks to missing diagonals the basic installation height of the JCW1800K, with its A-frame, can be reduced to 39.4 metres, even with the 10 metre conical M72j base tower section to raise free standing tower height (made up of 2.49 x 2.49 metre sections) to 66.25 metres.

To achieve the maximum freestanding tower height of 91.45 metres one additional special 3.18 x 3.18 metre by 10 metre long base section is used, which cannot be climbed. Even then the Kitagawa’s A-frame head installation height is just 49.4 metres.

Outside Japan, where there is less earthquake risk, there would be no need for the extra-large base tower sections. Initial installation height before climbing is then reduced by 20 metres.

The heaviest component on the JCW1800K is the pre-installed winch unit weighing 40 tonnes. It can be lifted into place using a 220 tonne capacity telescopic assist crane. After two days of erection time the tower crane can be ready for work.

Thanks to the open A-frame design and its typically Japanese climbing system, the complete crane upper can move down the crane tower and be secured to withstand typhoons.

Jib lengths on the JCW cranes can be adapted by adding sections from 42 to 51 to 60 metres. The jib head section is always the same so there are no extra costs to transform the crane from wind turbine construction to a general construction crane.

For smaller wind turbines, where required capacity is under 100 tonnes, crane installation time can be reduced. With a 74.6 metre boom the hook height can be increased to 105 metres on just four tower sections.

A clear view of the turbine installation site is essential. With a saddle jib crane the operator always has a bird’s view.

A benefit of a luffing jib design is reduced tower height. In addition to a suitable load view camera system, a special large cabin roof window should be considered. This is because, unlike general construction work, most of the critical work is done above slewing ring level.

Strict Japanese road regulations mean none of the JCW crane components are wider than 3.18 metres, taller than 3.53 metres, longer than 12 metres or heavier than 40 tonnes.

Time-saving features include a cruciform base, folding A-frame design and pre-reeving assist winch with fibre pilot rope for fast rope installation. No need for ballast on the upper crane further speeds up installation time. The crane can be installed at a 13 metre radius from the turbine and still be set to free-slew, thanks to its wide machinery deck and the 8m tail swing radius.

A JCW1400K version with 70 tonnes capacity at 20 metres was the first tower crane in Japan employed for wind turbine installation, this came into use in late 2020. It raised 120 metre tall, 2 MW wind turbines in the ecologically sensitive hilly woodlands of the Yamagata Prefecture.