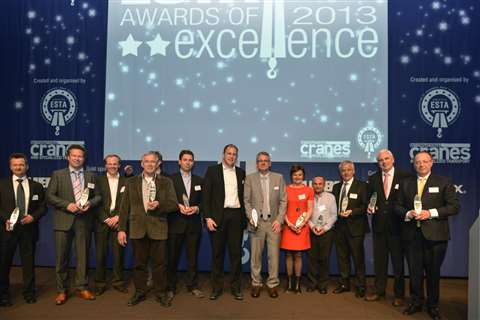 More than 500 people from the crane and specialized transport industry gathered in Munich, Germany, on 18 April for the spectacular ESTA Awards evening.

ESTA (the European Association of Abnormal Road Transport and Mobile Cranes) held its annual awards evening at the Westin Grand Hotel in Munich during the Bauma 2013 construction equipment exhibition.

Winners of the 11 awards were announced by Alexandre Vernazza and James King. Vernazza is son of the late Christian-Jacques Vernazza, ESTA president, who died in March.

King is managing director at KHL Group, organiser of the event and publisher of International Cranes and Specialized Transport magazine.

Winners are as follows:

Transport A. Trailer and load under 120 tonnes gross weight.

Transport B. Trailer and load over 120 tonnes gross weight.