Artist’s impression of the Port of Calais extension

With the European market for construction equipment reaching its highest level for five years in 2016, as reported by the Committee for European Construction Equipment (CECE), sentiments across the sector have generally been positive.

Though levels fell considerably short of pre-crisis levels, Europe still out-performed most global regions – as it had done in the previous year – placing it among the top global markets for growth in 2016. It ranked third in growth numbers, behind only China and India.

Although the broad picture is positive, Sebastian Popp, economic expert at CECE, said that there remain, “big disparities across the continent”. A northwest-southeast divide exists, with Southern Europe and Central and Eastern European countries falling short of expectations, according to Popp.

That said, the revival of the Russian market, after years of extreme deterioration, offered some hope.

A survey carried out by the RSPP (Russian Union of Industrialists and Entrepreneurs) found that foreign companies are seeing an improvement in the business climate in Russia.

This is consistent with the findings of the latest business climate survey from AHK (German Chambers of Commerce Abroad), which forecast a positive development of the Russian economy for 2017.

The strongest sales increases in Europe were recorded in France, Germany and Italy. Popp commented, “The German market in particular, and Northern and Western Europe in general, are close to their historical record levels.”

Notable projects in Northern and Western Europe include the extension of the Port of Calais, the largest passenger port in France and one of the busiest in Europe, with an average of over 10 million passengers a year.

A consortium led by French-based Bouygues and including Colas Nord-Picardie, Spie Batignolles and Jan De Nul will carry out the two-phase, €675 million ($715 million) project.

The government body that owns the port, Nord Pas de Calais Regional Council, commissioned the project in order to increase the port’s capacity and accommodate the newer 250 m-long ships that many ferry companies would like to deploy in the area.

It will involve the creation of three new service births, constructed from reinforced concrete and founded on steel or sheet piles, as well as improvements to ground infrastructure. Several new buildings will need to be built, along with ten bridges and overpasses, and various roads and yards.

A 3.2 km breakwater will be made from 4 million m3 of dredged material that will eventually be protected by concrete blocks as large as 14 m2. Engineers have been using 2D and 3D modelling programs to design both temporary protection and the permanent protection system, as well as to evaluate the effects of swell and erosion in the future. 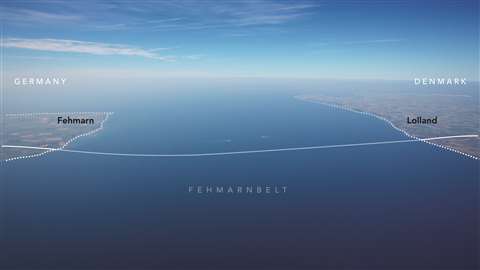 The expansion project is scheduled to be completed by the end of 2021.

The Fehmarnbelt fixed link between Rødbyhavn in Denmark and Puttgarden in Germany is another notable project.

Estimated to cost €6.2 billion (US$7.1 billion), it will be the world’s longest immersed tunnel and the longest road and rail tunnel, measuring 18 km in length.

As a key part of the European transport network that runs from Finland through Sweden, Denmark, Germany, Austria and Italy to Malta, the project will be of wider significance for Europe, according to Pat Cox, the EU Commission’s representative and coordinator of the TEN-T (Trans-European Transport Network) Scandinavian-Mediterranean Corridor.

For the tunnel elements, 3.2 million tonnes of concrete will be required, to be strengthened by 360,000 tonnes of reinforced steel. Thousands of jobs will be created, including 300,000 tunnel workers who will be employed for eight-and-a-half years. 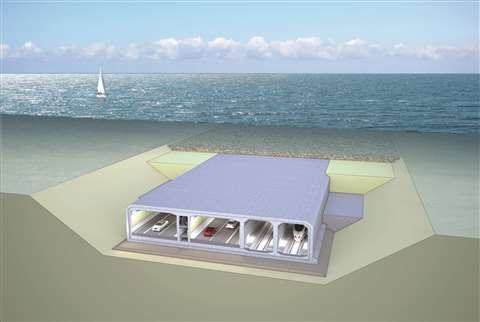 According to Femern A/S, roughly 100 dump trucks, excavators and cranes will be needed on the construction sites at Rødbyhavn and Fehmarn.

While administrative construction permission from authorities in Kiel in Germany is pending, they are ready to get construction underway on the Danish side. Railway land works between Ringsted and Rødby have already begun.

In Italy, an Astaldi-led consortium – including Ghella, Oberosler, Cogeis and P.A.C. – signed a €1 billion ($1.08 billion) contract to construct the Italian section of the Brenner Railway Tunnel.

The contract, which comprises the underground works between Mezzaselva and the Italian border with Austria, will mainly involve the completion of the exploration tunnel and two main line tunnels, stretching 69 km. Traditional digging methods will be used for 23 km of the tunnel, while the other 46 km will be dug using mechanised excavation with tunnel boring machines.

Astaldi said the Brenner Tunnel had an overall cost of €8.8 billion ($9.55 billion), of which 40% was funded by the EU, with the remaining 60% funded by Italy and Austria.

As the new railway link between Italy and Austria, expected to become operational in 2025, the tunnel is considered by the European Union to be a strategic part of the Trans-European Transport Network (TEN-T), linking Verona in Italy with Munich in Germany. It will form part of Corridor 5 between Helsinki in Finland and Valletta in Malta. 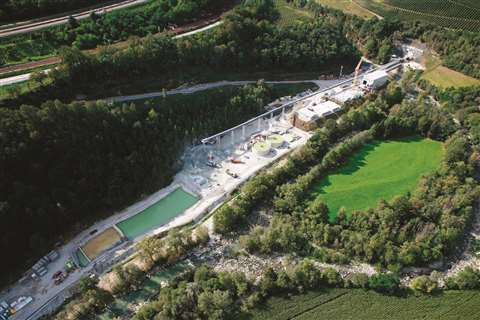 It stands to be the longest underground railway tunnel in the world, according to Astaldi.

Once completed, high-speed passenger trains will travel through the tunnel at speeds of up to 250 km/h, and it will also be used by cargo trains. Filippo Stinellis, CEO of Astaldi, said that it “will significantly enhance passenger and freight transport through the heart of Europe”.

Another record-breaking tunnel, which had high-speed trains running through it for the first time in the summer of 2016, is the AlpTransit Gotthard base tunnel in Switzerland, which cost more than $12 billion to build.

Stretching on for 57 km, it claims to currently be the world’s longest transport tunnel, and also the deepest at 2.3 km.

Travel times along the north-south Gotthard corridor have been reduced by around 30 minutes and roughly 50 passenger trains travel through the tunnel every day.

Switzerland said it will revolutionise European freight transport, with the number of freight services set to increase from 160 to 210 in the future. 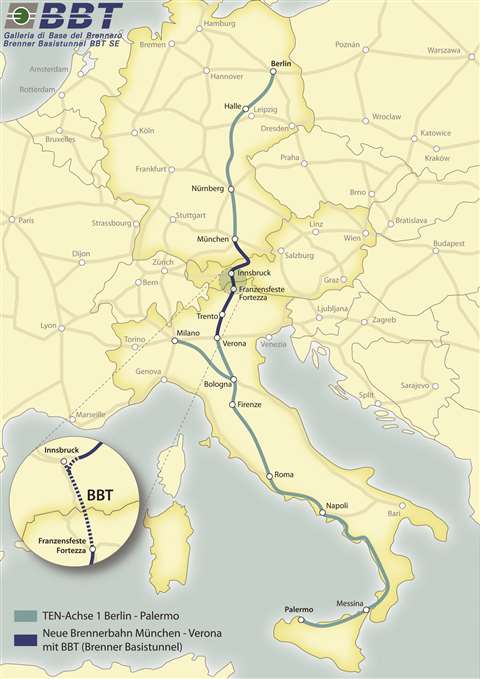 The tunnel has taken 20 years of planning and construction.

Sales in Europe were at their highest level for five years in 2016, and while the industry was still one third below the record levels seen in 2007, it was approximately 130% above the trough of 2009.

Sales of earthmoving equipment grew 12% and building construction equipment – such as tower cranes and concrete machinery – grew by 21%.

“It is encouraging to see that all construction machinery sub-sectors benefited from the upturn,” said Popp. “This corresponds to the situation of our customer industry which sees growth both in residential and non-residential construction as well as civil engineering.”

Looking ahead, a slight upward tendency has been forecast for 2017.

The CECE Business Barometer index had hit a temporary low in the summer of 2016, following the Brexit vote, but has been on a growth path since then. This resulted in the highest index value in almost six years in February 2017.

Almost all world regions were seen as positive in the manufacturer’s survey in 2017.

The US market is expected to see an upturn, fuelled by infrastructure investments pushed forward by the new Trump administration.

With India experiencing strong growth of 34%, closely followed by a sales increase of 22% in China, these two countries are anticipated to continue their upward trends beyond 2016.

A majority of European manufacturers expect the Middle East markets to recover in 2017, according to the survey.

However, it is not believed that Latin America will bounce back from the low 2016 level.

The optimism extended to the European market, with a lot of the manufacturers surveyed in the CECE Barometer expecting a positive scenario on the whole, except for the Turkish market. Hopes particularly concentrated on Scandinavia, France and Germany.

Hopes were also high across sub-sectors. With regard to earthmoving, road and concrete equipment, about two thirds of manufacturers expect an improvement in business. 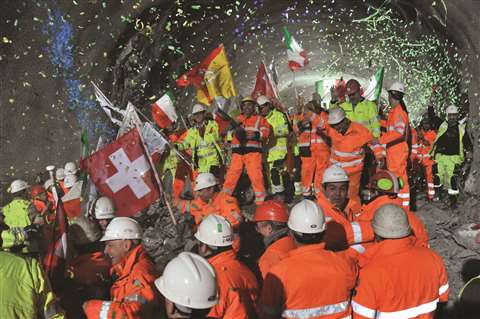 Workers celebrate the breakthrough of the AlpTransit Gotthard tunnel

Component suppliers, on the other hand, were less trusting of the upswing. Amid a positive average assessment, 63% of them expect business to be unchanged in the near future.

Overall, in the face of political uncertainty – caused not least by the Brexit vote – the most realistic scenario for Europe in 2017 appears to be stable sales of construction equipment with a slight upward tendency. This is against a backdrop of modest growth in the European construction sector, generally positive industry sentiments, and different stages of market recovery across the countries in Europe.

Furthermore, manufacturers should benefit from a world market that is expected to return to growth after three consecutive years of decline.

Also of potential benefit to European manufacturers is the new approach to financing transport infrastructure projects in Europe that has been announced by the European Commission.

Its call for proposals will seek to combine €1 billion ($1.09 billion) of grants with financing from public financial institutions, the private sector or, for the first time, the European Fund for Strategic Investments, which is considered the heart of the Investment Plan for Europe and a top priority for the Juncker Commission.

This combination of funds is intended to help achieve the twin objects of boosting investment in innovative, sustainable transport infrastructure upgrades and supporting the jobs required to put that infrastructure in place. 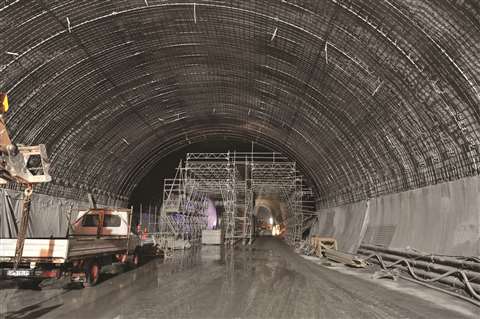 As well as contributing to the implementation of the Commission’s Strategy for Low-Emission Mobility under the Energy Union, the call also supports investments in sustainable transport in view of the upcoming road mobility initiatives being launched later in the year to strengthen the road transport sector.

“That is why we are launching an innovative solution to make the best of our resources, and unlock untapped private investments, with particular focus on Cohesion countries.” 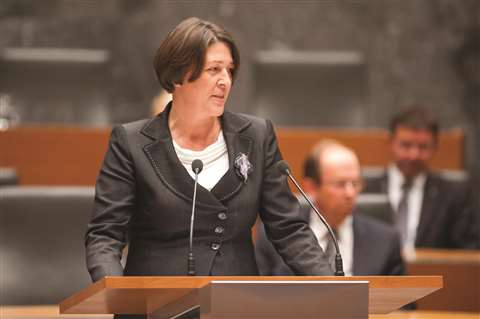 The Commission said this is the first time a call for proposals by the Connecting Europe Facility will require the combination of grants with financing from the European Fund for Strategic Investments, the European Investment Bank, National Promotional Banks or private sector investors.

Applicants seeking Connecting Europe Facility support will be asked to show evidence of the project’s financial readiness to get complementary funding from public or private financing institutions.

Selected projects are required to contribute to sustainable, innovative and seamless transportation along the Trans-European Transport Network, otherwise known as TEN-T.

Projects that remove bottlenecks, support cross-border links and accelerate the digitalisation of transport will be given preference, particularly in areas with greater potential and market gaps, such as in cohesion countries, sustainable and efficient transport systems, and the enhancement of inter-modality and inter-operability in the transport network. This includes new technologies and traffic management systems.

The European Commission noted that the construction sector is very important to the EU economy, providing 18 million direct jobs and contributing about 9% of the union’s GDP (Gross Domestic Product), in addition to the fact that it provides solutions to social, climate and energy challenges.

In view of this, the Commission has been looking ahead to the challenges that face the construction industry in Europe.

In terms of stimulating demand, efficiency improvements in existing buildings and renovations are said to have the highest potential.

With a shortage of trained personnel, the Commission said it is also important for the industry to improve specialised training and make the sector more attractive, in particular, to blue-collar workers, technical colleges and universities.

It has also pushed for greater innovation and the active uptake of new technologies so that the industry might become more efficient.

This feeds into the fourth challenge — climate change. Considering buildings account for the largest share of total EU final energy consumption (40%) and produce about 35% of all greenhouse emissions, there is clearly a lot of scope for greater energy efficiency.