Before we get down to the nitty-gritty of the data from this year’s crane rental confidence survey we would like first to like to thank everyone that provided us with feedback. With this confidence survey we are utilising our resources to provide a picture of the global crane market, as well as a glimpse of what the future may bring. No one knows your industry better than you, so the more people participate in the survey, the clearer the global picture becomes.

This year the response was great, with the bulk of respondents coming from the Middle East, Asia Pacific, Australia, New Zealand, and North America. We also had representation from South Asia, Europe, Turkey, the Commonwealth of Independent States (CIS), and Central and South America – although we could do with even more data from these regions so, come on you lot, please ensure you fill out next year’s survey! 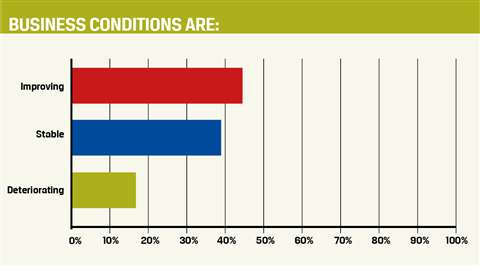 Underscoring this slowly growing positivity in the general business environment are the results that directly compare companies’ business activities over the last 12 months. Here a majority of respondents, 58 %, indicated their business activities had improved. This is up a huge 28 % on last year’s figure. Almost a fifth (19 %) of respondents reported their business activity as remaining stable – a decrease of 29 %, due to the increased numbers that thought things have improved – and there was an increase of just 1 % in those reporting a deterioration in business (a total of 23 %). So, the scales appear to be tipping in the right direction, although complacency should be avoided as 23 % is still a sizeable percentage.

Continuing this vein of optimism, expectations for business levels in 2019 are high, with 58 % of respondents believing that business will improve further. This is up 10 % on last year. And 43 % of respondents said they plan to spend more money on their fleet in 2019 than they did in 2018 – an increase of 4 %. 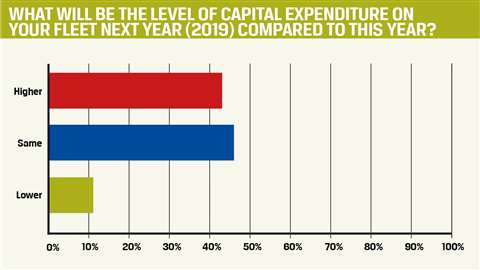 Optimism, however, is closely matched with a sizeable number of more cautious respondents where: 36 % thought business levels would remain stable (almost identical to last year’s figure of 35 %); and, 46 % planned to spend the same in 2019 as they did in 2018 (down 2 % on last year’s figure).

Following this trend, only 6 % expected business levels to deteriorate. This is far better that last year’s result – where 17 % forecast a decline and, subsequently, only 11 % of respondents planned to spend less on their fleet in 2019 compared to 2018. This is a reduction of 2 % on last year’s number. 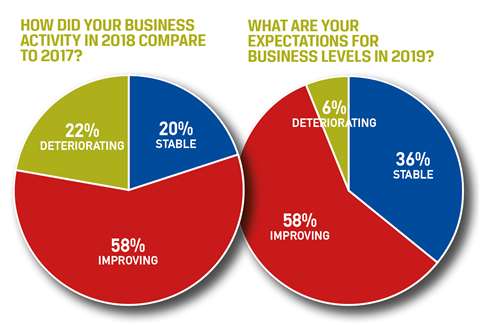 Yet despite the modest optimism, some familiar industry gripes emerged in the comments section of the survey. One anonymous respondent from a family-owned crane rental firm stated that greed from the larger rental firms is threatening to upset the equilibrium. “In Ireland mobile crane hire is just a race to the bottom!” he wrote. “And contract lifting is a joke, with hours of site visits, RAMs, and lift plans. Bigger companies are going around slashing the rates, killing the small companies.”

Low rates were also cause for discontent for one respondent from Pakistan – but for a different reason. “Here in Pakistan the rental market is very tough,” he wrote.

“Most of our clients prefer low prices over safety. This makes it tough for us to compete as we try and maintain safety standards as our priority. This preference for low price over safety is one of the main reasons why rental companies here prefer to buy old models rather than new ones.”

Another respondent also from Pakistan added: “With the introduction of Chinese cranes into the market, investment has shifted from old used cranes, such as Kato and Tadano, to new ones, such as Sany.”

Given the improving optimism highlighted earlier, increased market confidence seems to have translated into higher rental rates for all crane types over the last 12 months.

In the wheeled mobile crane sector the number of companies saying rates for 50 tonne capacity cranes rose increased by 16 % – from 22 % in 2018’s survey to 38 %. There was also an increase of 24 % in the number of respondents saying rates were higher in the 100 tonne capacity wheeled mobile crane sector, from 18 to 42 %, while in the 150 t capacity class, 33 % more companies said they are now charging higher rates compared to last year’s figures.

In the crawler crane sector, we surveyed the 70 and 150 tonne capacity categories, where 16 % and 26 % of respondents said they had increased prices.

And in tower crane rental, last year none of the companies operating in the 100 tonne-metre sector said they had increased rental rates, while this year 7 % said rates had increased.

The only category to buck this trend was the 300 tonne-metre tower crane segment where just 8 % of respondents in this year’s survey charged higher rates compared to 25 % in 2018’s survey.

Looking ahead over the next 12 months, the majority of rental firms said they are planning to keep their rates the same. Between companies planning to raise or reduce rates, more plan to increase them than decrease them. This was broadly the trend also demonstrated last year. 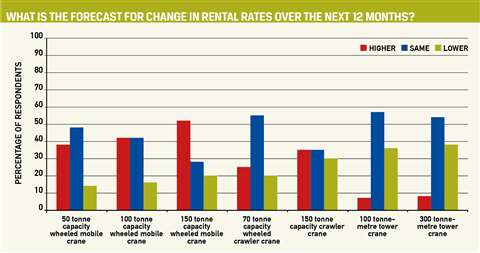 Tower cranes, however, buck this trend, with fewer rental companies expecting higher utilisation rates for the next 12 months compared to this time last year. In the 100 tonne-metre category, this has decreased

6 %, to 27 %, and in the 300 tonne-metre sector it has decreased 14 %, to 36 %. But this is not necessarily bad news, as the swing was offset by an increase in answers stating rates will remain the same rather than decline. In fact, across the board, the percentage of respondents saying utilisation rates were lower fell compared to last year.

In reviewing the results from this year’s rental confidence survey, it appears that the general trend of cautious optimism identified last year, continues, perhaps tempered by recent negative economic experiences and uncertainty for the future. It will be interesting to see how this plays out over the year before the next survey.

Please do take the opportunity to contribute when later this year we put out the call for entries for the next survey and make your voice heard.