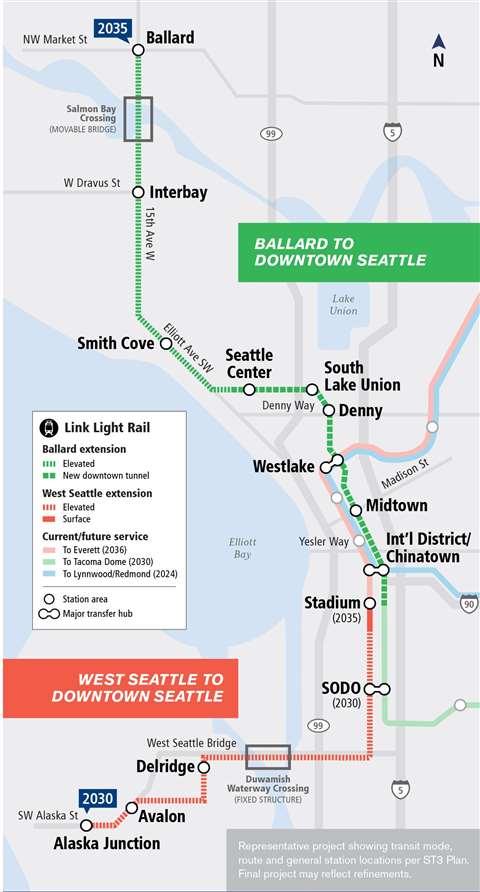 Central Puget Sound Regional Transit Authority (Sound Transit) has entered the assessment and early development phase of its US$6.7 billion West Seattle and Ballard Link Extensions (WSBLE) Project in the US.

The scheme aims to further connect Seattle with its western suburbs by providing fast and reliable light rail connects between dense residential and job centres throughout the region.

Sound Transit has proposed a 7.5km West Seattle Link Extension, which will cost an estimated $1.77 billion. The light rail link will operate on an elevated guideway from downtown Seattle to West Seattle’s Alaska Junction neighbourhood and will include a new rail-only fixed-span bridge crossing the Duwamish River.

Also, an 11.5km Ballard Link Extension has been proposed for $2.9 billion. It will run from downtown Seattle to Ballard’s Market Street area, and will feature a moveable rail bridge over Salmon Bay. In connection with this, a 5.3km Seattle Light Rail Tunnel has also been proposed, at an additional cost of $2 billion.

Over the coming year, the public will be given the opportunity to offer comments on the proposals, and based on this feedback – as well as technical analysis – Sound Transit will refine its plans for the specific routes and station locations.

The costs for the three projects are preliminary and they remain unfunded. So far, Sound Transit has established a $286 million engineering budget for the westward link extensions and it has entered into a $24.4 million contract with infrastructure solutions firm HNTB for development services.