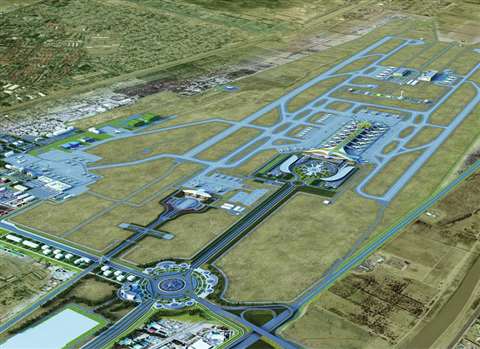 If you fly into Turkmenistan’s capital city Ashgabat these days, the last stretch of your journey involves a long taxi past a huge construction site, before coming to a halt at the modestly proportioned Terminal 2. In fact this bright new building was built as the first phase of the US$ 2.25 billion redevelopment of the airport, which will see its capacity rise from the current 3.13 million passengers per year to some 14 million.

Work on the project began in January 2013, with Turkish contractor Polimeks undertaking the project on a turnkey basis and looking to an August 2016 completion date. Redevelopment of the airport ties-in with the 2017 Asian Indoor and Martial Arts Games, which is being held in Ashgabat, and which the country is investing some US$ 5 billion in for the city-centre Olympic complex (see April 2015 Site Report).

The site retains the layout of the former airport, with north and south runways sandwiching a central axis containing the Terminal building and many of the ancillary structures.

But the first Phase involved building the currently active Terminal 2, which is away in the South-east corner of the site, and comprises 14,127 m2 of passenger buildings in a relatively low-lying 11.5 m high, 242 m wide complex. The 160,000 m2 apron provides spaces for up to 20 aircraft, and the facility can handle a maximum of 10 flights, or 1,250 passengers, per hour.

However, a complicating factor for Polimeks is that the phasing requirements of the project demanded that the South runway would be the first to be reconstructed, with the North one staying open until this work is completed in August this year.

That not only means a long taxi for plans between Terminal 2 and the active runway, but it also cuts the site in half as far as Polimeks is concerned, with the site of the new Terminal on the Eastern side cut off from many of the airside buildings in the central western section.

When iC visited the site in February, work was well underway on the reconstruction of the new 3,800 m long south runway, which includes digging down to a depth of some 2 m to remove the old structure and lay new sub-bases.

In addition, the new terminal buildings and many of the airside structures were well above ground level, and the last of the old buildings were in the final stages of demolition.
However, to get to this stage, Polimeks has had to contend with some testing site conditions, as project manager Mehmet Emre Bakkal explained.

“We struggled a lot because the ground water levels were high, so we had to jet-grout the ground everywhere underneath where the buildings will be. It is also a challenge when you excavate, because you see the water as soon as you dig. We have to drain everything to do our job. There is also a problem because the soil is impermeable, so the water just sits on the surface and the site gets very muddy,” he said.

And that is a lot of jet grouting. The total footprint of the new buildings comes to 361,377 m2. The centrepiece is of course the new terminal, which will cover 146,500 m2 and measure some 685 m from the front to the end of the pier.

The five-storey, 44 m high building will have a roof shaped like a bird in flight looking out over its 356 m frontage. “It clearly carries a lot of Turkmen tradition,” said Mr Bakkal.

The terminal will bring domestic and international services together under one roof, with stands for up to 51 planes as well as 10 helicopters. Among the mechanical & electrical installations are 84 elevators and 41 escalators, and the décor will be to high standards, with a lot of gilding and natural stone.

Mr Bakkal said, “There are also a lot of areas in the terminal where there are decoration and quality issues, where we need to get approvals for the client as we go.”

In fact there is nothing about this project which is straight-forward. “It’s like a Greenfield project in some ways, but the existing buildings meant we couldn’t do everything at once. We have to go in phases so we lost some time at the start. The hassle is that we are constructing on top of the old buildings. It was the same for the Terminal 2 site where we demolished 20 buildings of so,” said Mr Bakkal.

He said that another major challenge was concrete. The lack of nearby quarries has meant Polimeks has set up its own crushing and screening plants within the site perimeter to produce aggregates from the rock beneath its feet.

But it doesn’t end there. “Cement is not easy to find in this country for projects on this scale,” said Mr Bakkal. “The country’s cement plants have been at full capacity 24/7 to supply us. It is against the law to import cement unless it is not something made here, but then you have to prove it.”

And if nothing else, the sheer scale of the scheme is daunting. The site has a total area of 12 km2 with about a 13 km perimeter.

There are a total of 104 buildings to be construction – 48 ‘main’ ones and 56 smaller structures – and the total paving including runways, aprons, taxiways and roads comes to 2.3 million m2.

According to Mr Bakkal, one of the most difficult areas is the fuel plant to south of the site. “It is a challenge because it has to be co-ordinated with a lot of disciplines,” he said.

It is not just a case of constructing the plant and storage vessels, there is also a formidable amount of pipe work to be laid which will be used to get the fuel to where it is needed in the central areas once the airport is up and running.

And in terms of the buildings, there are of course standard airport structures like the 83 m tall control tower, but also others which are a bit more unexpected. For example, in addition to the main terminal there is an additional 5,740 m2 VIP Terminal, which is for the use of the Turkmen president and other high officials.

Meanwhile, the southern side of the site will include several buildings for the national carrier, Turkmen Airlines. These include the expected – training facilities and a flight school – as well as what Mr Bakkal describes as “Social buildings” including a sports hall, hospital and dormitories.

But for all its challenges, the project is on time and budget. A big milestone will come in August, with the completion of the new southern runway, which will allow Polimeks to take possession of the Northern landing strip and rebuild this, even though it will only have a year to do it.