Ferma Corporation was contracted by its client MCM Construction on the Schuyler Heim Bridge project in California to remove the existing drawbridge and supporting structure so the half-built new bridge next to it could be finished. The scope of work included four primary bridge piers, which are almost 19.5 m (63 ft) below mean sea level. 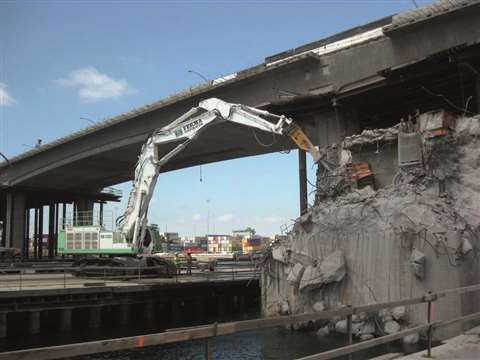 Specialist equipment for the removal included multiple excavators weighing more than 226,000 kg (500,000 lb) using tools and attachments close to 16,000 kg (35,000 lb). The largest piece was a 317,500 kg (700,000 lb) excavator with 31.4 m (103 ft) of reach down and 29.3 m (96 ft) of reach at the front. All the equipment used required modification so it could work in the underwater salt water conditions, and meeting the required environmental standards required a large silt curtain panel system around each pier to control the release of material.

To enable underwater visibility for the operators to locate the walls requiring removal, sonar equipment was used for all the excavators. This was supplemented by recording of video at routine intervals.

Recycling efforts included separating the rebar from the concrete and sending it, along with other steel removed, out for recycling. In addition, the clean concrete was separated, downsized and sent to a processor for recycling. Special buckets were also used to separate out the concrete from bay mud so that it too could be recycled.

Natural disasters are a growing concern for humanity and Brandenburg Industrial Service Company believes that while the world cannot prevent such tragedies, it can become better prepared. In the future of emergency management, communication, information sharing and collaboration between agencies and the community will be all-important.

As a result, Brandenburg took part in a major training exercise with private, local, state, federal and international first-responder organisations at the Radisson Hotel in Merrillville, Indiana.

The company was contracted to knock down the 343-room hotel and adjoining 2,800 sq m (30,000 square ft) convention centre by the owner, White Family Lodging, which was very interested in co-operating with local and federal agencies and was instrumental in co-ordinating issues such as liability, costs, and schedules for the project.

The operation simulated a collapsed building from a tornado. A week before the training exercise, the Indiana National Guard placed “victims” in the form of mannequins throughout the hotel. Brandenburg then brought down portions of the structure to simulate multiple structural collapses, injuring some victims and trapping others beneath the rubble. The exercise was a live simulation that ran continuously for a total of 36 hours.

It is common for organisations to participate in training exercises at vacant facilities but Brandenburg said the magnitude of this situation was extraordinary, with more than 700 participants.

During the exercise, Brandenburg used a crane and hydraulic excavator from its fleet of heavy equipment to remove large sections of precast concrete and twisted steel, allowing responders to locate and rescue 40 mannequins scattered throughout the site and buried in the rubble from what was once the hotel. Brandenburg’s fleet of customised demolition equipment and experienced crews meant it could provide the workers and the tools necessary for the safest outcome of a natural disaster.

The 40,000 sq m (430,000 sq ft) Museum of The Bible in Washington DC will house more than 40,000 religious artefacts, one of the world’s largest collections. In the past the site has been an eight-storey refrigerated food storage warehouse with 45 cm (18 in) thick exterior masonry walls; by the early 1980s it had become the Washington Design Center (WDC) and had added the Hyphen Building to its west and next to the Washington Office Center used by several government institutions. Conversion to the Museum of The Bible started in 2012, and two years later the Maryland-based company was contracted to perform the demolition. 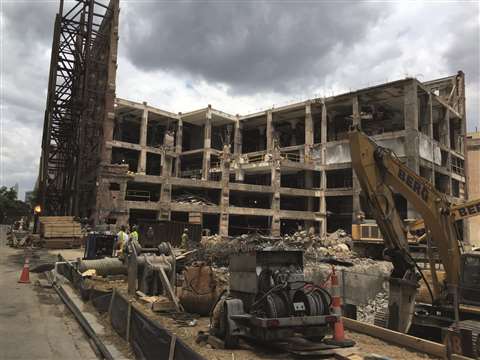 Exploratory demolition started straight away to complete a full inventory of the existing structure and prepare for the heavy structural work.

To provide the space necessary to complete the new work, Berg had to figure out a way to remove the top two floors while leaving the existing exterior walls in place and unharmed.

It also needed to remove every other subsequent floor to provide an open floor area with ample head room and excavate the existing basements in conjunction with the demolition operations.

As Berg moved its operations from each alternative floor each subsequent layer of operations had to be reinforced in order to provide enough stability to maintain the structural rigidity of the building and prevent it from collapsing.

Additionally, Berg had to separate the WDC from the 15,000 sq m (162,000 sq ft) Hyphen Building and demolish the more recent structure.

As soon as the interior finishes and mechanical systems were removed, Berg began reinforcing the existing structure by installing shoring towers on the lower floors and creating openings along the exterior walls so vertical I-beams and kickers could be installed to reinforce the exterior masonry wall and columns. This support of the existing structure allowed Berg to remove the penthouse, roof and eighth and seventh floors while leaving the exterior walls in place.

Berg described the Bible Museum as a feat of epic proportions, physically, spiritually, and structurally, but the company completed the work without serious injury or incident.

The proximity to sensitive pedestrian, railway, vehicular and political daily operations only made the need to succeed more prevalent.

Berg said that ultimately the Bible Museum will be a religious institute visited by millions but it began with meticulous planning and execution by a few people with a desire to perform this difficult demolition operation.

Delsan AIM entered into a contract with the government of Newfoundland and Labrador (NL) to decommission and demolish a former paper mill that on the eastern shoreline of the Exploits River in the town of Grand Falls – Windsor. The mill operated from around 100 years until it closed 2009, though a hydroelectric generating facility that had been part of the mill’s operations stayed in service during the project.

Delsan AIM managed and executed all aspects of the project, including the abatement and disposal of all remaining designated substances and hazardous materials, some of which contained asbestos. 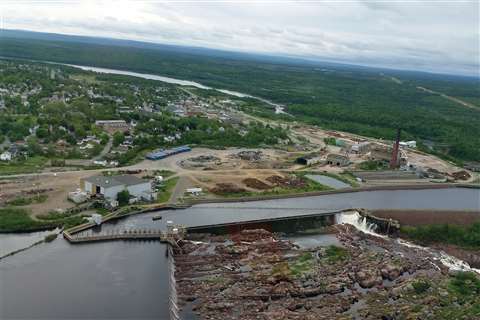 As part of the project, the company actively marketed mill equipment through its website, selling several items including a Fuji King debarker and eight refiners.

After decommissioning, it demolished and removed the specified buildings using a fleet of eight full-size excavators with a range of attachments for both demolition and material handling operations, such as shears, grapples, buckets, pulverisers, hammers and magnets. The fleet also included a high-reach excavator with a maximum range of 24 m (80 ft), which demolished most of the higher structures at the site.

For structures outside this range, Delsan AIM employed engineered procedures to safely control drop a 53 m (175 ft) water tower and a 39 m (130 ft) high precipitator. A remote-controlled mini-excavator, suspended by a mobile crane, lowered a 67 m (220 ft) brick stack to a safe elevation, allowing the rest of the structure to be demolished with the high-reach excavator.

All demolished concrete was reused on site after being crushed to 100 mm (4 in) minus, to backfill voids created by the removals and to grade the site to prevent water ponding. Any remaining concrete was stockpiled on site for future use in a designated location as approved by the owner therefore recycling all the concrete.

All non-ferrous scrap metals and shedding material, about 5,000 t, was shipped off site by truck in sea containers and transferred to the port of St John’s for onward shipment and processing at AIM’s main scrap recycling facility in Montreal.

Heavy metal scrap, totalling 20,000 t, was trucked to the port of Argentia and shipped directly to customers.

Priestly Demolition was contracted by Bondfield Construction Company to demolish a 17-storey stair tower in a functioning hospital. The company faced numerous challenges including dust, noise, vibration and mechanical downtime, but mitigated the risk to patients, staff, and visitors to meet hospital’s need to provide continuous service.

The only access to the work was by foot or tower crane. While the tower crane itself was reasonably close to the stair tower, the unloading lane was on the opposite side of the newly constructed patient stair tower. Priestly’s work began when the emergency exit was changed from the old stair tower to the new facility.

The demolition plan called for a top down approach, using the tower crane to remove the largest pieces of concrete slab possible, to increase efficiency and achieve the quickest cycle time.

The Brokk 100, a remote controlled electric demolition robot, was mobilised with an Atlas Copco hammer to begin the demolition. At the top of the stair tower, the Brokk 100 began to hammer the concrete slab into sections that could be hoisted by the crane, which was then rigged to the section.

The rebar was cut and the section was taken by crane to a dump trailer staged on site. With nothing level in the stair tower, Priestly designed and fabricated a self-levelling platform to work from. This was installed and moved down through the floors as the project continued.

At the 12th floor, the footprint was slightly larger as the stair tower became a link between two of the existing structures that were due to remain.

This portion of the stair tower was from the original construction. Here, Priestly deployed a second hammer on a Hitachi 27.

The company said on-site logistics were extremely difficult as the entire stair tower had to be removed using small equipment in a very limited foot print, while moving and storing materials was a big challenge.

Optimising the capacity of the crane to make the maximum lift was coordinated by measuring and laying out the cut lines on the sections of beams, columns, and slabs. Finally, the concrete sections, rubble, steel stair stringers, and demolition debris were recycled away from the site.