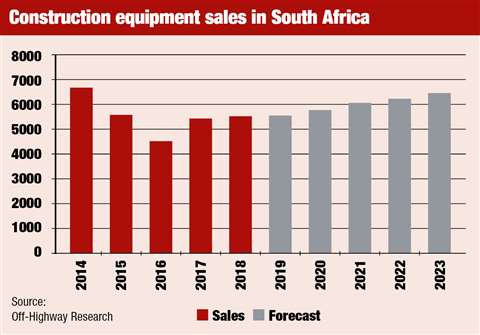 A surge in demand from the mining segment has been responsible for significant equipment sales in South Africa over the last two years. However, the construction industry has been weak and increased investment is needed to stimulate machine sales, according to a special report from Off-Highway Research.

The report revealed that in South Africa equipment sales totalled nearly 6,000 units in 2018. This was an increase from the low point of 4,613 machines in 2016, but demand still remains below what is regarded as a natural and healthy level for the industry.

However, even in its depressed state, the South African market for new equipment was worth just over US$1 billion last year.

Equipment sales this year are expected to be – at best – level with 2018, due to disruption and uncertainty around this year’s general election.

It is hoped that the election of Cyril Ramaphosa, with a mandate to address the issues of corruption and economic mismanagement from Jacob Zuma’s term as President, will lead to an improvement in South Africa’s economic fortunes.

“After the slowdown in 2016 and the sharp decline in construction output in 2017 and 2018, a recovery in the construction sector is overdue. There is clear evidence that fleets have been aged-out over the last two-three years due to market uncertainty and the reluctance to invest. There is pent-up replacement demand in the market as a result,” said the report.

“The demand for coal to address South Africa’s power chronic shortage has been the key positive in the equipment industry over the last two-three years. Mining has driven significant volumes in the dump truck, excavator and wheeled loader segments, and the industry’s need for large equipment is also a plus for the industry.”

Off-Highway Research’s 220-page Special Report, The Construction Equipment Industry in South Africa is believed to be the most extensive study produced on the country’s construction equipment industry. Click here to buy online or contact mail@offhighwayresearch.com for more information.