T time: is the time right for trailer-mounted aerials? 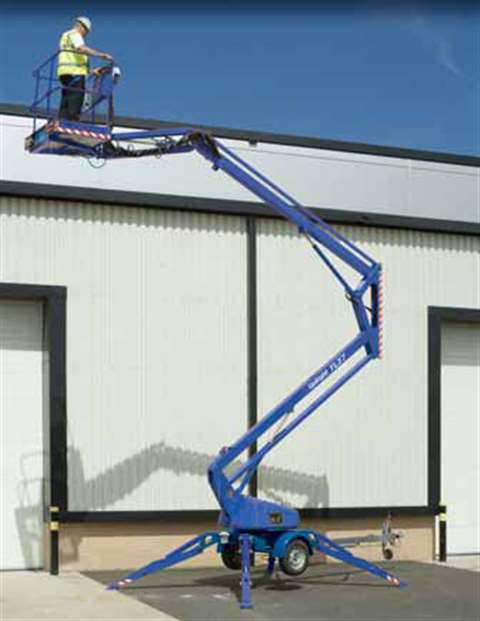 UpRight's TL37 trailer-mounted articulated boom was originally branded under the Aerial Access K13. The machine is light with a stable in-line boom with hydraulic outriggers, jib and powered cage rota

Overshadowed by the four wheel models in terms of sales, trailer-mounted booms are still a viable product where the less-is-more maxim is key within its applications. With its ease of transportation and comparatively light weight, these units offer end users working on lighter duty tasks a cheaper solution to get the job done all the same. For its cost, manufacturers swear by its efficiency.

As rental yards, both large and small, have a choice between articulating models and straight stick ones, which seems to be their preference? Howard Kaplan, vice president, product parent at JLG Industries, says: “There are more articulated models available in the North American market. Articulated models tend to be favored by smaller homeowners due to their lighter weight and shorter length. The straight stick trailers are marketed as heavy duty models targeted at the light construction market.”

With its five units in the Summit Series, with two stick and three articulating booms, BilJax's Director of Marketing Brent Hagedorn says the company provides a diverse selection of machines and options that addresses all customer bases in terms of cost and needs.

Hagedorn says the 2622T is a versatile machine for its size but reports that its launch has been overshadowed by the introduction of the self-propelled X-Booms.

Genie's David Spears, product manager, also confirms that at least in the US, most trailer-mounted equipment is articulated.

Genie's two most recent trailers are the TZ-34 and TZ-50. The TZ-50 has a working height of 55½ feet and more than 29 feet of working outreach. The unit features a 500 pound platform capacity in its working envelope.

trailer-mounted aerials, via its Fresno, CA-facility, will begin limited manufacturing of its TL37 and TL49K hydraulic models by the end of this year. The TL37, formerly the UK-manufactured Aerial K13 model, is a 43 foot reach height, trailer-mounted boom. The unit is light with an in-line boom that features hydraulic outriggers, jib and powered cage rotation. A drive assist system for the model is in development.

“For the most part, the US market favors articulated and articulated telescopic machines which give good 'up-and-over' reach,” says UpRight's Sales & Marketing Director Richard Tindale. “However, some customers do still favor the simplicity of a straight telescopic boom.”

The TL49K has heavy-duty booms with a working height of 55 feet. Also forthcoming from the company is the entry-level TL34 lightweight trailer, which is a re-introduction of the Aerial E12 model. The machine will have a working height of 40 feet and an outreach of more than 16 feet.

Of course, UpRight is now a sister company to Snorkel, both being owned by the UK's Tanfield Group. The plan is for many of the UpRight scissors and booms to be sold in North America under the Snorkel brand. However, the trailers will retain the UpRight brand in North America and be targeted mainly at smaller rental stores through manufacturer representatives.

Uniquely, Bil-Jax reports that each configuration has its advantages: articulating models have better range of motion, while stick booms provide greater outreach.

Because of its low cost and easy transportation attributes, some in the industry have claimed that trailer-mounted booms are favored by the smaller, independent rental yards. So what is the sales split like?

Genie suggests its models tend to go to both large and small yards. “The vast majority of trailer mounted aerials are sold to rental customers, both large consolidated and small independent rental companies,” says Spears.

Kaplan says that JLG has a more diverse split in its customer base with a greater concentration with independent rental chains and home improvement supply companies than it has with its broader product lines.

In North America, does the same hold for the size and length of these machines? Spears says the Genie TZ-34 and TZ-50 models fit within length and weight requirements and regulations, and they can be towed behind a standard pick up truck.

“One of the main selling features of a trailer-mounted product is its light weight, which allows the machines to be towed over the road instead of needing a dedicated trailer to transport the machines. Their weight also allows for operation on softer ground than traditional aerial products,” says Spears.

Bil-Jax says weight and length only seem to be an issue in terms of its costs. “In our so-called soft-economy, customers tend not to buy more than they need. A customer doesn't seem eager to invest in a 60-foot lift, for example, when a 40-foot model will suffice,” says Hagedorn.

For weight and length, UpRight agrees: it claims Europe tends to favor the larger models. “Our experience in the US is that these considerations are much less important here than in Europe, as roads tend to be wider and heavy pick-up trucks capable of towing the largest trailer are very popular,” Tindale says.

UpRight says its customer base appreciates the simple (hydraulic) yet reliable machines that are easy to control and maintain. The company is discontinuing its electric trailer mounts, given the strong reception of its hydraulic products.

Bil-Jax implies its customer base also share an appreciation for the simple unit, as the company claims its users can set up use of its Summit Series in less than 30 seconds. Genie's units are operated by electrically driven hydraulic systems whereas JLG claims its customers chose power source by size, with electric for the T350 and prefer gasoline powered with the T500J.

So it can be said that trailer-mounted booms offer a strong product that is easily transportable, offer fast set up, are becoming more adaptable to terrain during their passage from site to site and perform as solid as other aerial work platforms.