Ten US states account for almost 60% of the total construction pipeline in the country, according to information provided by GlobalData. In total there are 50 states in the US. 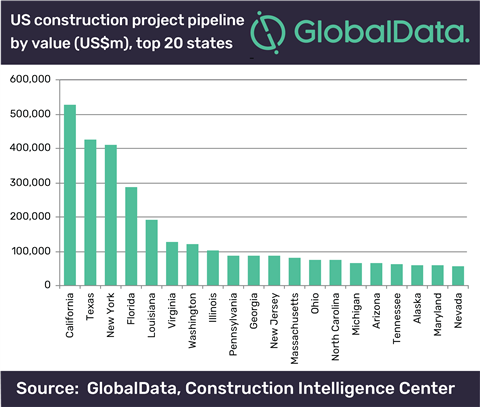 With a total of 1,302 projects worth US$524 billion, California has the largest number and value of projects in the US construction project pipeline. Infrastructure projects and mixed-use developments combined represent 56% of California’s total pipeline value.

Texas has the second largest amount of construction projects in the pipeline by value, followed by New York and Florida, with Louisiana rounding off the top five.

“The construction of mixed-use development is booming across many US states, with the building of American city centres and suburbs coming to resemble one another due to changing demands from consumers and homebuyers,” said Dariana Tani, economist at GlobalData.

The data is based on more than 11,000 tracked large-scale country-wide construction projects. These projects are at all stages of development, from announcement to execution.

The total value of the construction pipeline in the country is estimated to be US$3.7 trillion.