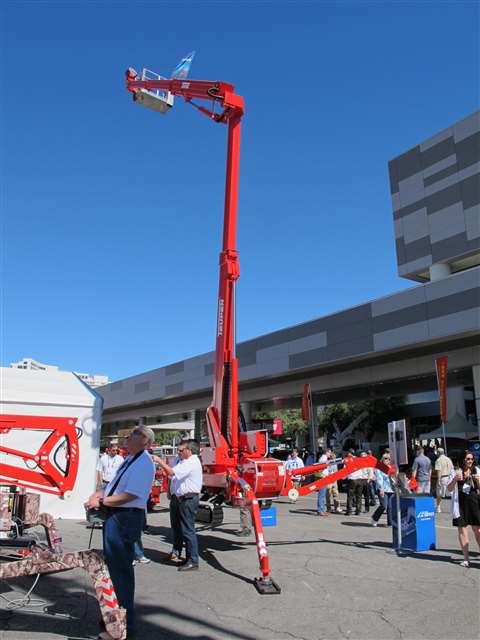 Teupen used ConExpo to debut its new TL63A articulating boom lift. The tracked unit has a 63 foot working height with 550 pounds of platform capacity that can reach 39 feet outward.

The model has been improved from its predecessor with a faster drive speed from 0.9 mph to 2 mph, an increase in platform capacity from 440 pounds to 550 pounds and now features 4th generation computer logistics, which offers more precise controls, said Scott Reynold, president of Teupen USA.

The TL63A also has a "coming home" function that allows operators to long press a single button and brings the boom back to ground level without having to manually maneuver the boom functions.

"We have had a fantastic show response," Reynold said. "We're increasing rental channel interest and growing our product awareness."

Teupen also added two new account managers; Pete Masterson who will be Seattle-based and Major Griffey who will reside in Charlotte, NC.

The company has also transitioned its machine nomenclature from metric-based to imperial model identification. The new numbering system will be based on platform height rather than working height. For instance, a LEO 23GT is now a TL69A, which translates to Tuepen Leo 69-foot working height and articulated. For more on the new model identification system, visit the company's website at www.teupen-usa.com.