The Knowledge: A case study 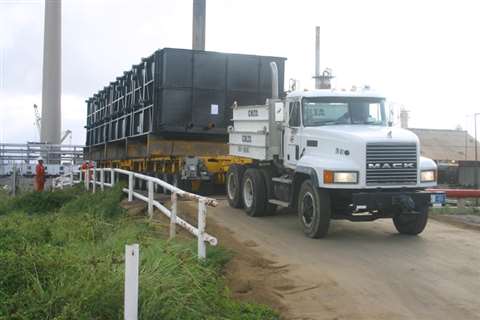 To find out if a prime mover is suitable for a particular project some basic calculations need to be performed. These are rather difficult if you are not familiar with them; however, you only have to make these calculations once in the life time of the prime mover.

Given is the following engine info:

As this prime mover is used for pulling a load, what we are interested in is the torque as this determines if the prime mover (in the appropriate gear) is strong enough to get the transporter rolling. In this case the maximum torque is 1,560 N*m (1,149 lb*ft) and this is delivered (to the drive shaft and eventually to the tyres) at a RPM of 1,200 per min. This does not mean that the prime mover should increase RMP to 1,200 per min to get rolling.

It means that the RPM should be gradually increased until the transport combination starts moving, usually at a lower than max RPM. However, if the combination does not move at 1,200 RPM, there is no need or use to further increase the RPMs as the maximum torque has already been reached, the prime mover is too weak to pull this load.

The maximum speed is achieved at 1,800 per min but that becomes only important once the prime mover is already rolling and speed becomes more important than torque.

The first 5 gears (total 18 gears) of this truck’s main gearbox have a gear ratio of:

The higher the gear ratio, the more pulling power (torque) the truck can deliver. This truck can generate 500 % more torque in 1st gear than in 5th gear, it is really designed to get a heavy load moving.

In addition this truck is equipped with a secondary gearbox, also called an auxiliary gearbox or transfer case. This is a gearbox installed in line with the main gearbox to and multiplies engines output before it is delivered to the drive axles and tyres.

The gear ratios of the transfer case are:

The first two gears of this transfer case enhance the truck’s power; the 3rd gear (with ratio 1.00) adds nothing to the original gearbox ratios and makes the truck perform as if the transfer case was not present. The 4th gear would actually hurt the truck in pulling performance but enhances it in speed; this gear would only be used once the truck is already moving at considerable speed.

The last gear is found in the differential, it has a ratio of 8.27. All gears together are assumed to have a 90 % efficiency, 10 % is lost in internal friction and generation of heat that is transferred to the oil in the various gear boxes.

- counterweight: 35 ton (on drive axles only)

How much pulling force can this truck generate when using 1st main gear and first auxiliary gear?

This is the maximum tractive force that the engine can supply to the tyres of the drive axles.

However, this force can only be transferred to the road surface (and move the truck forward) if there is sufficient down force, in the form of counterweights, on the drive axles. If there is not enough counterweight on the drive axles, there will not be enough traction between the tires and the road surface and the tires will just slip or spin under the torque. The maximum traction or rim pull can be calculated as follows.

The static friction is an empirical number that is dependent upon the road surface. Dry asphalt without any foreign contamination such as sand or water has a static friction between a minimum of 0.6 and a maximum of about 0.8 with rubber tyres.

As you can see, the rim pull is about half of the tractive effort. This means that at 1,200 RPM (the RPM that generates maximum torque) the tires will spin. There are three possible solutions for this (in best practical order):

1: try to move the transport combination at a lower RMP and therefore lower rim pull

2: shift to a higher gear with a lower gear ratio

Using second auxiliary gear, with a 1.24 gear ratio, results in a total tractive effort of 39.5 m ton or 19.76 m ton per drive axle (43,538 LBS). Theoretical this is still too much but this is easily controlled by RPM. See figure 2 for a graphical representation of these numbers.

Now we know that this prime mover in its current configuration is best used in 2nd auxiliary gear as the “drive away” gear.

Last test that still needs to be performed is if the rim pull is sufficient to actually start moving the transport combination.

Let’s assume that this truck is pulling a 12 axle hydraulic transporter (weight 40 ton) with a 200 ton load on it. The road is assumed to be level.

This turns out to be more that enough to start this transport combination moving. See figure 3.

Engine speed
There are many design factors that play a role in this but generally engines with a longer stroke produce more torque than speed and engines with a shorter stroke produce more speed than torque. In a short stroke engine the piston travels a much shorter distance and can therefore achieve much higher RPMs. High RPMs are synonymous with high speed, but less torque. Even though it is officially limited to 15,000 RPM, a formula 1 engine can easily achieve 19,000 RPM with their extreme short strokes. They are purely made for speed, not much torque which results in an almost complete fiberglass body.

Your family car normally runs at 4,000 to 6,000 RPM and is generally designed as a happy medium vehicle (there are exceptions), it produces sufficient torque to still accelerate (which requires torque) with 5 passengers in it and reach decent speeds while traveling on the highways.

Trucks and prime movers have long stroke engines. As the pistons travel a longer distance, the RPMs are much lower. These engines are built for torque (pulling power), they are made to “carry” a load. The example truck had a maximum RPM of 2,100 per min.

Here is an analogy with the world of sports. Lets take a sprinter and a body builder; the sprinter has a lean body and can run 100 meters in 10 seconds flat. If you give him a 20 LBS backpack his performance (speed) will drop drastically. He is built for speed.

The body builder however runs the 100 meters in a much slower time as his body is not as lean; he has a lot of muscle tissue. The 20 LBS backpack will not affect his performance much; he is used to lifting and carrying weights. He is built for torque.

Marco J. van Daal has been in the heavy lift & transport industry since 1993 starting with Mammoet Transport from the Netherlands and later with Fagioli PSC from Italy, both esteemed companies and leading authorities in the industry. His 20 year plus experience extends to 5 continents and over 55 countries and has resulted in a best selling book “The Art of Heavy Transport” which is available at www.the-works-int.com. Marco has a real passion for sharing knowledge and experience, the prime reason for his frequently held seminars all over the world. He currently resides in Aruba, Dutch Caribbean, with his wife and two daughters.