The Knowledge: Bars and beams 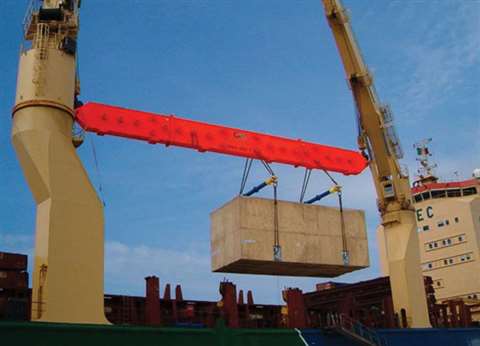 In the first Anniversary article of our The Knowledge series, Marco van Daal examines spreader bars and lift beams used in rigging.

* To avoid damage to the load/sling/shackle/lift point.

* To avoid sliding of the sling on the load.

Figures 1 and 2 show an example of each of these using Modulift spreader bars.

There is a multitude of perfectly justifiable other reasons to use spreader bars and/or lift beams. Some are highlighted below but these are arguably the two main ones.

How much the slings may deviate from a perfect 90 degree angle with the horizon is often determined by the party that designed the lifting attachments, for example, the lift lugs, trunnions, pad eyes and so on.

In case of basketed sling arrangements, such as used for lifting yachts and long pipes, the deviation from 90 degrees can be determined by a Competent Person taking friction between the sling and the load into account.

The major difference between spreader bars and lift beams lies in the design. Where as a lift beam is a rigging tool that is subject to bending and shear, a spreader bar is subjected (mostly) to compression.

A disadvantage of lift beams is that they are often custom or purpose designed and not always available “off the shelf” while spreader bars are often designed in a modular fashion that can be adapted to a variety of lift requirements. Spreader bars are versatile, by using different lengths for the “inserts” (the pipe of beam between the end points or termination points) or by combining different inserts to make up a certain required length. A spreader bar configuration can be changed “on-site” to meet lift requirements.

An advantage of lift beams over spreader bars is the limited headroom, see also below.

Multiple application
Due to the fact that lift beams are often custom- or purpose-designed you often see these lift beams with multiple holes or multiple trunnions (or a combination of holes and trunnions) on them to make them as versatile as possible, despite them being of fixed length and/or layout.

Many lift beams, without being specifically designed for this purpose, can be used upside down, adding to the versatility of the tools, again, despite it being of fixed length and/or layout.

Figure 3 shows the use of a lift beam (actually it is more a lift plate with a stiffener flange attached against buckling) used in an upside down scenario. The tail load of the vessel was too much to handle for only one of the Manitowoc 4000 crawler cranes. Instead their capacities were combined by using a lift beam with slings from each of the crane hooks to the lift beam and a single sling to the tail lug located on the vessel skirt.

With this type of lift beam, as pictured in Figure 3, one needs to be aware that the design aids in the lift in one way and hurts in the other way, in respect to lifting of the load.

Figure 4 illustrates this. Scenario A shows the lift arrangement as is used in Figure 3. As long as both cranes lift and lower the vessel skirt at the same speed, the load in each of the cranes will remain equal as X and Y are equally spaced from the lower lug.

When crane B lifts faster than crane A, crane B will experience a higher load than crane A as depicted in Scenario B. This can be expressed as follows:

With a change in the design, a reduced distance between the upper lugs and the lower lug, the same formulae (equations 1 and 2) apply and Scenario C does not differ from Scenario A in terms of forces in crane A and crane B as long as both cranes maintain an equal hoisting and lowering speed. It can be easily seen, however, that when crane B lifts faster than crane A the increase of the load in crane B is much less as the distance B has not decreased as much in Scenario D compared to Scenario B.

Figure 5 shows the same lift beam but, used inverted, a single lift point at the top with two vertical slings to the load. As this is a single hook lift the CoG of the load will move under this single hook, no matter where it is located. Scenario A shows a lift where the CoG is located perfectly vertical under the single lift point.

Scenario B shows a lifted load where the CoG was slightly offset from the centre line. The lift beam rotates under the influence of this offset COG resulting in a higher load in sling A (equation 1 and 2 apply) and a tilted load which may be undesirable.

The same change in design as before, a reduced distance between the upper lug and the lower lug, results in Scenario C when the CoG is located perfectly vertical under the single lift point. As long as this is the case there is no difference between scenario A and Scenario C.

With the same shift in CoG as in Scenario B, however, the lift beam in Scenario D rotates much more, due to the smaller distance between the upper and lower lug and the angle at which the load is lifted is much more severe.

It deserves recommendation, therefore, that the purpose of the lift beam is known at the design stage to make the appropriate design decisions.

Figure 7 shows two lift beams as used on board the mv Happy Buccaneer while lifting a so called upper turret on board. The trunnions as well as the holes are clearly visible on these lift beams. These lift beams have a fixed length but the arrangement of trunnions and holes make them versatile enough to lift this load on board. If you look closely you will be able to see that these lift beam are actually used as spreader bars, but next month’s article will highlight spreader bars.

Terminology
Traditionally the term Safe Working Load (SWL) was used to denote the design rated capacity of a sling, shackle, lift beam, spreader bar etc. In recent years, it has been felt that, considering the useable capacity of many of these items depends on the manner of their use, using “safe” in defining rated capacity of rigging is misleading and the term Working Load Limit (WLL) has largely superseded SWL. The American Society of Mechanical Engineers (ASME) B30.9 publication now uses only Rated Load, Rated Capacity or Work Load Limit when referring to the maximum rated capacity of a sling. The term SWL has effectively retired in the USA.

Below I am quoting Keith Anderson from his book Rigging Engineering Basics:

Work Load Limit (WLL) or Rated Load - The maximum rated capacity of a piece of rigging tackle, as determined by the designer or manufacturer, when used under ideal conditions in a specific configuration. e.g. a 1.5 inch diameter sling might be rated with a WLL of 21 tons i.e. It has a rated capacity of 21 tons in a straight line pull.

Rated capacity - The same 1.5 inch x 21 tons WLL sling might be rated by the manufacturer at 42 tons when used in a basket hitch with the legs vertical, so long as it is not bent more tightly than 25:1.

Assessed capacity - If the same 21 ton sling is basketed over a 6 inch diameter pipe, the Competent Person should de-rate the sling to 73 % of its (basket) rated capacity as a result of the tightness of the 4:1 bend ratio. This would give an Assessed Capacity of 30.7 tons when used in that manner.