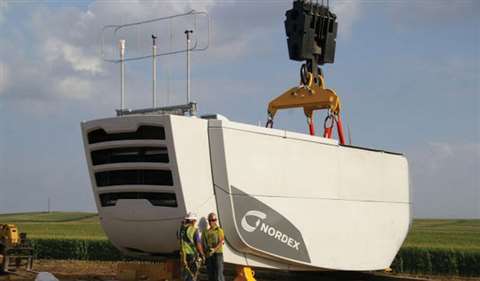 Figure 1 shows the lifting of a nacelle for wind turbine

Recent articles in this series have explained the differences between spreader bars and lift beams. Here Marco van Daal moves on to discuss the merits of the latter.

International Cranes and Specialized Transport articles in The Knowledge series have highlighted the main differences between lift beams and spreader bars. A primary difference is that spreader bars are generally lighter in design because they are only exposed to compression forces, that is, if they are properly designed. Their modular design means that struts or inserts can be added to make them suitable for multiple applications.

It may have left the impression with the reader that spreader bars are the rigging tool to have and why bother even looking into lift beams with all their disadvantages. This thought may be true for some situations. There are, however, many situations and applications where a lift beam is simply the only rigging tool that can do the job.

This article, the last one in the series on bars and beams, covers a number of these applications.

Advantages of lift beams
Lift beams, although generally more tedious to design and build (a considerable amount of engineering goes into designing a lift beam), are an extremely valuable tool when it comes to repetitive lifts where size, shape and weight tend to vary little. Figure 1 shows such an application ‑ the lifting of a nacelle for wind turbine. Wind farms are built all over the world, the rigging including the lift beam, is shipped with the equipment to the destination. Using a lift beam in such situations makes the execution easier as it is a fool proof method. There is no changing of length involved or keeping track of bolts and nuts. An added benefit in this scenario is that the lift beam can be used by the shipping company to lift the nacelle on and off the ocean going vessel. Again, this eliminates that “others” have to design a rigging proposal that is never as good as the lift beam that is designed to do this job over and over again.

This brings us to an interesting difference between spreader bars and lift beams. As spreader bars are, by design, versatile and multifunctional, it makes them vulnerable as well. The versatility means that this rigging tool can be taken apart and put back together in a different length and with different top and bottom rigging to suit the next lift. This automatically means it can be applied incorrectly if the user does not know the implications of, for example, using the following:

- bottom slings are not vertical but angled, thereby introducing additional compression force to the centre tube

- using “home made” inserts of an unknown or questionable steel grade to make up the required length.

In addition, spreader bars are much less suitable to cope with a centre of gravity that is not in the centre of the load. In such cases slings of different lengths have to be used, or shackles need to be added to one side of the spreader.

In short the inexperienced rigging engineer can set himself up for an unwanted situation if he is not aware of the potential implications as mentioned above. In addition, when shipping spreader bars with inserts, it is necessary to keep track of various end caps, drop links, slings, shackles and nuts and bolts from the spreader set. Depending on where in the world it is shipped and depending on the organisation of the rigging or site crew, this could be a challenge. A fixed lift beam with fixed rigging may be a better solution.

Lifting with limited head room is an application that a spreader bar can simply not perform, it is not made for that purpose. A lift beam however, is perfectly suitable for this. The accuracy of the CoG determines how little headroom is required. Refer to earlier articles in The Knowledge series.

Figure 2 shows a lift beam arrangement that coped with both limited headroom as well as an offset centre of gravity. A single 650 ton capacity strand jack was used to lift this 300,000 pound (136 tonne) reactor vessel head. As you can see, the lift beam has been fitted with holes where lifting tackle can be attached.

So what if you want to have the best of both worlds; the no hassle solution of a fixed lift beam with the versatility of a spreader bar. Even this is possible. The rigging that is present on ocean going vessels is a good example. At sea there is constant motion so changing a spreader bar is not the easiest thing to do. Most vessels have a standard set of rigging gear that is designed and built to suit the capacity of their cranes, the size of the vessel and a wide variety of dimensions.

It often consists of a lift beam designed to lift the biggest and heaviest cargo for that particular vessel. In addition, these lift bars are fitted with add-ons that include additional holes, lugs and trunnions. Time is money so this rigging is also often designed so that it can be pre-rigged, prior to the vessel arriving in the port. It can be picked up from its storage place and is ready to be attached to the first package.

It goes without saying that when working with such tools, the engineers, riggers and rigging engineers should be well trained in applying the correct configuration.

Figure 3 shows a three lift beam arrangement for lifting a vessel. The lift beams are designed in such a way that not a single shackle is needed for this scenario, except where the rigging terminates at the cargo. This is more often than not outside the control of the transport or lift company. The slings wrap around the various trunnions. Even at sea this is an easy rigging application to build. What can also be noted (it is a bit difficult to see) is the offset centre of gravity of the vessel. The top lift beam is not being used symmetrically.

Figure 4 shows a perfect example of a lift with an extreme offset in the centre of gravity, yet the lift beams with a correctly designed rigging arrangement can lift this cargo without any problems.

It should be noted that when lifting cargo with an offset centre of gravity, or with a limited head room (using short or no top slings), the stability of the load becomes a concern. This, however, is a topic for a different article.