The UK government, police, and industry groups are working to stimulate equipment end users, and the utility sector in particular, to demand better anti-theft measures for construction equipment.

"Users must say what they want", said Rob Oliver, chief executive of the UK's Construction Equipment Association (CEA), "We want a market that gives a dividend for taking good care of equipment,"

Construction Industry Theft Solutions (CITS), the joint government and construction industry body that is trying to reduce equipment theft, and the Metropolitan Police convened a meeting in London this week attended by around 50 representatives from major utility companies and their supplying contractors to hear about the best anti-theft practices and to discuss the next steps to reduce theft.

High on the agenda was the UK's Construction Equipment Security and Registration (CESAR) scheme, successor to an earlier registration effort and renamed in January 2007. Since then, 20500 items of construction equipment in the UK have been registered with a nationwide, central database and marked, both covertly and overtly.

One objective of the meeting was to make the utility industry aware that CESAR is a valued component of police anti-theft efforts. The CESAR system allows police to quickly and reliably determine if equipment is stolen; difficulty in doing so has been a major impediment. Authorities say that 26% of CESAR-marked equipment is recovered, compared to the estimated 5% recovery rate overall.

Detective constable Ian Elliott, head of the Metropolitan Police's National Intelligence Unit for construction equipment, said the police had opened a "Pandora's Box of fraud, deception, and other illegal practices. I am amazed that the construction industry has been carrying on with theft as it has for so long. Theft seems to be an acceptable cost added to the bill. The construction industry is still in the 1980s [compared to measures used against automobile theft]," said DC Elliott.

Neil Clutterbuck, chairman of the British Machinery Insurers Association told the meeting that, although current security measures are lax and the stolen vehicle recovery rate is low, trends are positive. Mr Clutterbuck said, "Key to increased security is the combination of covert marking and physical protection appropriate to the item." The construction industry can expect to see increasing premium discounting and different pricing based upon use of security measures, he said.

Security measures were the topic of a presentation by Mike Briggs of the Motor Insurers Repair and Research Centre, commonly called Thatcham. Thatcham, which launched a new five start rating for anti-theft measures for construction equipment at the event, has published guidelines on construction equipment security measures, adapted from those introduced in 1992 for automobiles. Authorities credit adoption of those guidelines for reducing crime involving passenger cars by 66% since then.

The CITS and Met Police will host two meetings later in 2009 to deliver the message of the March meeting to insurance and rental companies.

CITS is a group of representatives from several industries and from government for the reduction of construction equipment theft, founded in 1994. 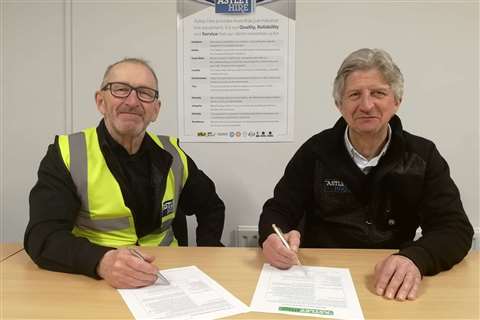