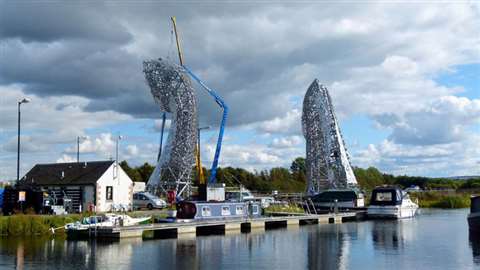 Easi UpLifts, one of the largest rental companies in the UK and Ireland, provided eight Genie articulating and telescopic booms to help build The Kelpies, a two headed horse sculpture in Scotland.

Created by Glasgow artist Andy Scott, the 30 m (98.4 ft) high, 600 tonne sculpture is part of The Helix, a huge parkland project connecting communities between Falkirk and Grangemouth in Scotland.

Delivered from the Easi UpLifts depot in Glasgow, the Genie booms helped construct the pair of 160 tonne steel substructures, and clad them with 140 tonnes of 468 individually-shaped stainless steel panels. A canal running between the massive horse heads added to the challenge of this high-precision, five-month undertaking.

Easi Uplifts provided training and equipped the machines with extra large 2.4 m platforms, a solution recommended at Easi UpLifts for any job involving booms above 24.4 m.”

Work began in June with the installation of the sculpture’s huge structural steel framework. In conjunction with cranes, the eight Genie boom lifts manoeuvred around a considerable number of obstacles to fetch and fix the bolts used to hold the intricate maze of girders firmly together.

As the weeks drew on, the machines then proceeded with the lifting and placement of the sculpture’s stainless steel cladding – a job that involved working in extremely confined spaces at very tight angles. “Due to the canal in between the two horse heads, access was also limited and much of the work had to be carried out from one side. This is why we recommended using two Genie Z-135/70 articulating boom lifts for this particular job,” said Alan Gordon, area sales manager based at the Easi UpLifts Glasgow depot.

Completed to schedule, The Kelpies were ceremonially topped out at the end of last year. The landscape immediately surrounding them was opened to the public in April this year and is expected to attract thousands of tourists to boost the region’s local economy.