Utility equipment: Call in the specialists 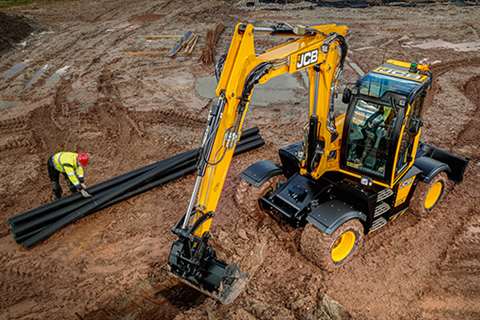 Although it is still common practice for contractors to make use of excavators for digging trenches, there is little doubt that the use of specialist equipment for utilities installation can make the job quicker and less labour-intensive and, importantly, substantially reduce disruption.

With innovations in specialist equipment, such as horizontal directional drills (HDD) and pipe fusion machines, gains can clearly be made on jobsites that include a significant element of specialist work.

Among the biggest developments in the sector was the emergence of trenchless systems in the 1980s, which meant pipes and other underground services could be installed without the disruption of digging a trench. This remains an area of technological development, with plenty of new products coming onto the market.

Vacuworx has a number of solutions for utilities work, including its new mid-range AMC series of lifting attachments. The AMC 6 and AMC 4 models operate in conjunction with compact to mid-sized excavators, as well as with truck mounted articulating cranes, using the hydraulic power from the host machine without a significant reduction in the equipment’s overall lifting capacity.

Suited for steel, poly or concrete pipe, as well as trench plate and concrete slabs, the AMC series is designed to undertake work in congested street applications or other tight areas. In these situations, the host equipment must be able to manoeuvre in relatively small or busy spaces, which means the attachment must be as small as possible without sacrificing power and reliability. With mounting options for both traditional excavators and truck cranes, the AMC series is able to load and unload materials while maintaining a compact overall footprint. In addition, Vacuworx says the lightweight, self-contained design is hydraulically powered to eliminate fuel costs, emissions and noise.

The AMC 6 has a lift capacity of 6 tonnes and comes standard with a pin adapter to mount on an excavator. The AMC 4 features a hydraulic quick-change adapter for truck crane applications and has a lift capacity of 4 tonnes. Both models can accommodate single or double vacuum pad arrangements, depending on the material to be lifted.

The PL4809E, with its Volvo D13J Tier 4 Final engine, has a maximum tipping capacity of 110 tonnes, and is able to work across rugged terrain and on slopes of up to 35 degrees, which is beneficial for lowering-in applications.

The machine’s 360-degree swing means operators can rotate the superstructure around to lift and place large, heavy pipes.

The PL4809E can also be converted into a standard excavator (in as little as 4.5 hours, according to Volvo), by switching the pipelayer boom for an excavator alternative, which is an optional extra.

Volvo says hydraulics are matched for both pipelaying and digging operations, so there is no loss of power in either configuration.

At this year’s ConExpo event in Las Vegas, Liebherr premiered its new RL 56 pipelayer – the first of its generation 6 models.

The RL 56 boasts increased lifting capacity (72 tonnes) and a hydrostatic travel drive to give it enhanced performance.

In terms of fuel consumption, the RL 56 is driven by a Tier 4 Final Liebherr diesel engine with an output of 210 kW. The firm says the combustion process has been optimised to minimise internal particulates, so no diesel particulate filter (dpf) is required.

With the engine operating at 1800 rpm, fuel consumption is reduced, while load-sensing hydraulics supply only the oil required, this protecting the components.

Liebherr says, depending on the nature of the work, and provided regular checks are performed, hydraulic fluid change intervals can be as long as 8,000 hours of operation.

Operator safety is another high priority with the RL 56, and cabs have integrated rollover protection as standard. The safety brake also opens and closes automatically, preventing the machine from rolling on steep inclines.

Small, versatile machines can often make all the difference to utilities contractors, and JCB has one in the shape of its 3CX Compact backhoe loader.

The loader – which is just 1.95 m high and 2.74 m high – has an extremely tight turning circle, as well as switchable steering modes, which allow it to work in confined areas with minimum disruption.

The machine’s driving modes can be switched between 2WS and 4WS, allowing operators to travel safely on highways, then change steering mode for on-site manoeuvrability.

Recently, JCB has enhanced the 3CX, by making a high-flow auxiliary hydraulic circuit available, which delivers up to 120 litres per minute of flow to power a range of loader-mounted attachments.

In addition, the firm is promising additional features for the machine, including multi-function front loader control, a powerslide option, allowing repositioning without ground damage, a skid steer attachment hitch which will increase work tool availability and additional cab storage.

Within the utilities sector, JCB also has its much vaunted Hydradig wheeled excavator, which it released last summer. This was the first machine of its type to move the engine, tanks and ancillaries to the chassis, enhancing it in many important areas, such as visibility, stability, manoeuvrability and mobility.

There’s no denying the small excavator is still a vital piece of equipment for utilities work. Kobelco’s smallest excavator, the SK08 has a compact design that makes it ideal for operating inside buildings or where space is severely restricted.

The machine has an operating weight of 1,035 kg, with a slim upper structure that allows it to enter passages with a width of just 700 mm.

The SK08 is also equipped with a crawler extension/retraction mechanism as standard and the crawlers can be further retracted to just 680mm to avoid obstacles underneath the machine.

The machine’s tail swing radius is 725mm and it has a maximum tail overhang of 305mm, and its boom swing, which provides a digging width of up to 310mm outside the left crawler (crawler retracted) when the boom is swung 85 degrees to the right, aenables the smooth digging of side ditches close to walls.

Doosan says the stability of its new DX17Z is best-in-class, compared with all other ZTS machines on the market.

To back up this bold claim, Doosan describes the machine’s retractable undercarriage – when fully retracted it allows the excavator to go through narrow spaces; and when fully expanded, it provides optimum stability for the excavator − especially when working over the side. Expansion and retraction are simple and easy via an electric switch on the control panel.

Optimum stability for the machine is achieved by fully expanding the retractable undercarriage and using the long dozer blade. With the firm foundation of optimised stability and lifting capacity, the DX17Z offers versatility in operating a wide range of attachments.

US-based Ditch Witch recently introduced the MT16 microtrencher, designed to cut narrow trenches 125 to 500 mm wide and up to 4064 mm deep. Ditch Witch ays the MT16 decreases the disruption to surrounding infrastructure during fibre deployments. An integrated hydraulic accumulator maintains constant pressure on the saw frame for sharper-edged cuts and improved spoils removal. In addition, an infinitely variable hydraulic plunge feature is said to eliminate manual adjustment of the microtrencher by providing variable depth control from zero to 4064 mm. For a tighter-cut radius, the unit’s frame has the ability to swing up to six degrees in each direction, enabling operators to efficiently cut on a street corner or around a cul-de-sac.