Veidekke Entreprenad, the Swedish subsidiary of Norwegian-based construction and civil engineering company Veidekke, has entered into a SEK 950 million (€95.3 million) agreement with Swedish-based Vitartes to continue cooperating on the Patienten quarter project in Stockholm, Sweden. 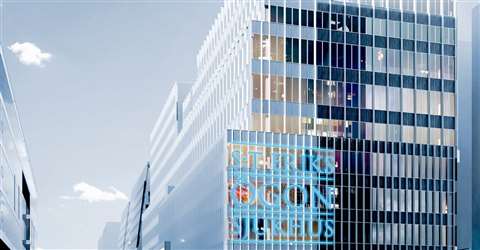 Artist’s impression of the buildings to be constructed by Viedekke and Vitartes in the Patienten quarter, Stockholm, Sweden

In the summer of 2016, the two companies entered into a contract to provide the groundwork, foundations and concrete for the Patienten and Princeton quarters.

The current design and built contract is for the construction of the remaining buildings in the Patienten quarter.

The quarter comprises a total of approximately 42,000m2, and as one of two properties in Vitarte’s Scandinavian Life Science project it will be an Eye Centre of Excellence, with St Eriks Eye Hospital as a key tenant.

The project will be built directly adjacent to the main entrance of Nya Karolinska Hospital and partly on top of the existing tunnel of the E4 motorway.

The works, which will primarily be carried out by Veidekke’s subsidiary Arcona, are scheduled for completion in the spring of 2020.